Amid a barrage of atmospheric rivers, California and parts of the West saw drought improve—but remain. Meanwhile, drought is almost gone along the Mississippi River, but the Plains remain in bad shape. 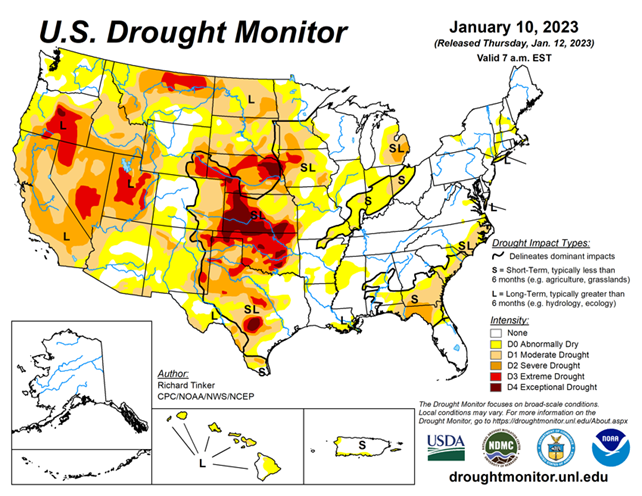 A series of atmospheric rivers (AR) led to heavy rain and high-elevation snow across parts of the West, especially across California. Precipitation totals exceeding 4 inches (liquid-equivalent) were widespread, and several areas in and near the Sierra Nevada, Cascades, and coastal ranges recorded over one foot of precipitation. Moderate to heavy precipitation was also common along the coast and in the higher elevations of the Pacific Northwest, some higher elevations in the central and northern Rockies, part of the upper Midwest, portions of the lower Mississippi Valley, the interior Southeast, and scattered locales across the Ohio Valley and the Northeast. Precipitation totals generally exceeded 1.5 inches, and topped 4 inches in parts of the Southeast, central Utah, and the higher elevations in the Pacific Northwest.

Much of the precipitation fell on areas experiencing dryness and drought, so across the country, improvement was much more common than deterioration. Mild temperatures prevailed across the country except where significant precipitation was observed in the northern Plains and Far West. Daily high temperatures averaged more than 12 deg. F above normal in central and southern Texas while daily low temperatures averaged 10 to 13 deg. F above normal across the Great Lakes, the Southeast, and the southern Plains.

During the next five days (January 12-16) more heavy precipitation is expected across California, with parts of the Sierra Nevada, Cascades and northwestern California expected to receive another 4 to 7 inches of rain. Similar amounts are forecast for parts of the immediate Oregon coastline, the Washington Cascades, and northwestern Washington, where normal amounts are much higher than across most of California. From the Great Basin and Intermountain West to the Mississippi River, conditions should be much more tranquil, with 0.5 to 1.5 inch restricted to some higher elevations in the central and southern Rockies and the Middle Mississippi Valley. Little or no precipitation is anticipated throughout the Plains. Meanwhile, a swath from the Ohio/Mississippi Confluence and the interior Southeast northeastward through New England is expected to receive at least 0.5 inch, with totals topping 1.5 inches in parts of Upstate New York and New England. Light amounts are expected in the Great Lakes Region, the upper Midwest, the South Atlantic coastal plains, and most of Florida. Temperatures throughout the contiguous states are expected to be near- or above-normal.

The 6-10 day outlook (valid Jan 17-21) shows above-normal precipitation favored over the vast majority of the contiguous states, and in southeastern Alaska. Chances exceed 60 percent that amounts will be in the wettest one-third of the historical distribution from northern California and adjacent Oregon eastward across northern Utah, and across the middle Mississippi, lower Ohio, and Tennessee River Valleys. Subnormal precipitation is only favored in a small strip along the Rio Grande in southwestern Texas, and no tilt of the odds in either direction were identified in the northern High Plains, the southwestern half of Texas, and southern Florida. Above-normal temperatures are expected across the central and eastern parts of the country, with the highest odds (over 80 percent) in the Northeast, the mid-Atlantic Region, the eastern Great Lakes, the Ohio Valley, southern Appalachia, the Carolinas, and northern Georgia. Meanwhile, below-normal temperatures are expected from the Great Basin and central Rockies southward to the Mexican border, with the best chances (over 60 percent) in the desert Southwest and adjacent southern Rockies.