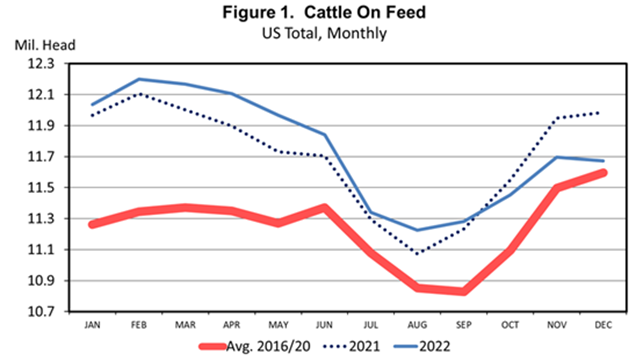 Drought pushed more cattle into feedlots earlier this year and kept feedlot totals higher for longer.  Monthly inventories from February through June of 2022 were not only higher year over year but were at record monthly levels in the cattle on feed data series that began in 1996.

The top chart shows the seasonal variation in feedlot inventories in recent years.  Feedlot inventories typically peak in the late fall or winter and reach a seasonal low in late summer/early fall.  The five-year average from 2016-2020 in Figure 1 (red line) shows that feedlot numbers peak in December on average and are seasonally low in September.  However, in 2021 and 2022, the seasonal peak has been in February with the low in August (Figure 1).  In the past five years, the variation from the seasonal peak to the seasonal low has been about 890,000 head, or about 8 percent of the average annual feedlot total.