California and part of the South/Southeast were the big winners of precipitation this week, receiving inches of moisture. Other parts of the western and eastern U.S. received lesser amounts of precipitation,. However, the central U.S.—where areas of extreme (D3) to exceptional (D4) drought remain—was relatively dry. 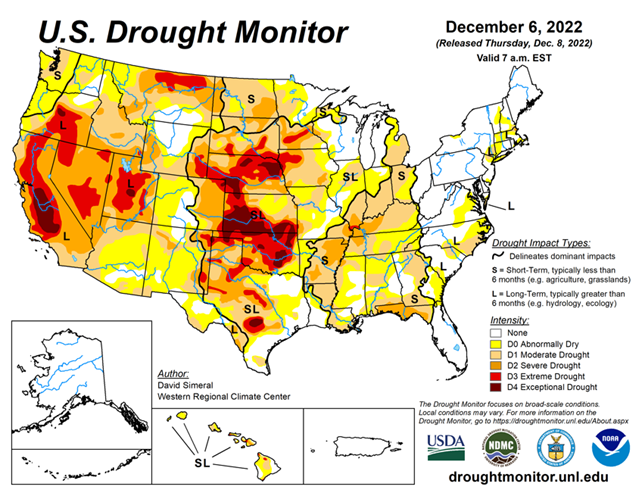 This U.S. Drought Monitor (USDM) week saw an active storm pattern across much of the Western U.S. as well as another round of isolated heavy rainfall across portions of the South and Southeast. Out West, several rounds of Pacific moisture streamed into the region bringing heavy rains to the lower elevations of the Pacific Coast Ranges and snowfall to the higher elevations of the Sierra Nevada, Klamath Mountains, Cascades, northern Great Basin, and the central and northern Rockies.

For the multi-day storm event, the heaviest snowfall accumulations were observed in the Sierra Nevada where up to four feet was observed including at the Central Sierra Snow Lab, which reported a 7-day snowfall total of 48.8 inches. Moreover, the storms boosted basin-wide snow water equivalent (SWE) to well above normal levels in the Sierra Nevada drainage basins and basins across the Intermountain West and Pacific Northwest, according to the National Resources Conservation Service (NRCS) SNOTEL network.

Along the Central California coast in the Santa Lucia Range (south of Monterey), 7-day rainfall accumulations ranged from 4 to 11+ inches—helping to reduce longer-term precipitation deficits (past 24 months) that ranged from 8 to 20+ inches after this week’s storms.

In the Desert Southwest, locally heavy rainfall was observed in southern Arizona and west-central New Mexico in association with sub-tropical moisture that moved into the region on Saturday with isolated areas receiving 2 to 3+ inches of rain. The rainfall improved soil moisture levels and helped to boost precipitation totals during the past 12-month period to normal to above-normal levels across much of the southern portion of Arizona.

In the Northern Plains, light snowfall (2 to 6 inches) was observed in the Dakotas and eastern Montana in addition to the passage of an Arctic front early this week, which dropped temperatures into the single digits in North Dakota. In the Midwest, a wintery mix of rain, freezing rain, and snow impacted southern Wisconsin while light-to-moderate snowfall accumulations (2 to 6 inches) were observed in Minnesota and Upper Peninsula Michigan.

In the Interior Deep South, locally heavy showers (2-to-4-inch accumulations) brought some relief to drought-affected areas of northern Alabama and Georgia as well as southeastern Tennessee, and southwestern North Carolina. In the Northeast, light-to-moderate snowfall accumulations (1 to 4 inches) were observed last week with the heaviest accumulations in Upstate New York.

In Maine and New Hampshire, strong winds and shower activity (1 to 2 inches) impacted the region last week causing power outages in areas of Maine. In the South and Southeast, locally heavy rainfall was observed across a west-to-east band extending from northern Mississippi to northern Georgia. The storms helped to reduce short-term precipitation deficits (past 30-60 days) in some areas and boosted streamflows and soil moisture to above-normal levels.

The CPC 6-10-day Outlooks call for a moderate-to-high probability of above-normal temperatures for the eastern half of the conterminous U.S. with near-normal temperatures across much of the Plains states, while the Western U.S. is forecasted to be below normal. In terms of precipitation, above-normal precipitation is expected across most of the conterminous U.S. except for western Texas and areas of New Mexico.