Winter is here along with dangerously cold temperatures... Precipitation this past week helped improve drought conditions in the Mississippi River Basin. Meanwhile, the Plains are still in rough shape, despite some improvements in the Northern Plains. The West has good snowpack but needs more. 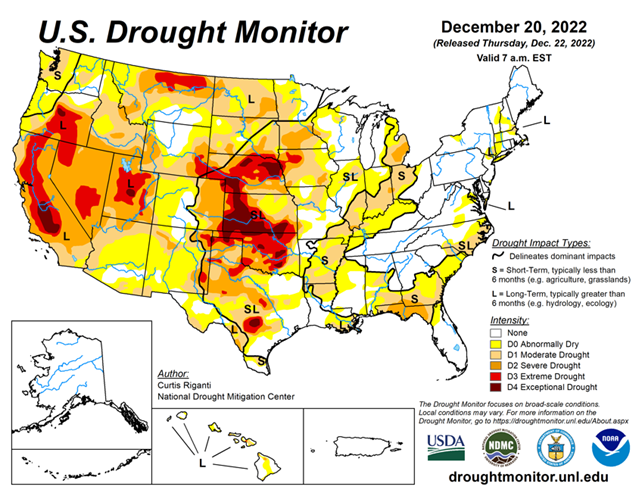 This week, moderate to heavy precipitation fell over the northern Great Plains, parts of the Upper Midwest and much of the south-central and northeast U.S. This led to widespread improvements in drought conditions and abnormal dryness in these areas, as precipitation deficits lessened and soil moisture and groundwater and streamflow improved. Meanwhile, the West region was much drier this week than the last few, so few changes were made there, and mostly long-term drought and abnormal dryness continued across much of the region. A Kona low affected the Hawaiian islands this week, dumping heavy amounts of precipitation in the form of thunderstorms and high mountain snows on the Big Island, which led to improvements over most of the islands.

As the current week leading up to Christmas Day comes to a close, a powerful storm system will drag a strong Arctic cold front through much of the central and eastern U.S. to the east of the Rocky Mountains. Light to moderate precipitation amounts, much of it in the form of snow in the central Great Plains and Midwest, will transition to heavier precipitation as the storm system strengthens in the Great Lakes region late in the week. Moderate to heavy precipitation accumulations are likelier in the eastern Great Lakes, Northeast and Mid-Atlantic. Into early next week (the week of Monday, December 26), heavier precipitation is also likely in northern Idaho and in far northwest California, western Oregon and western Washington.