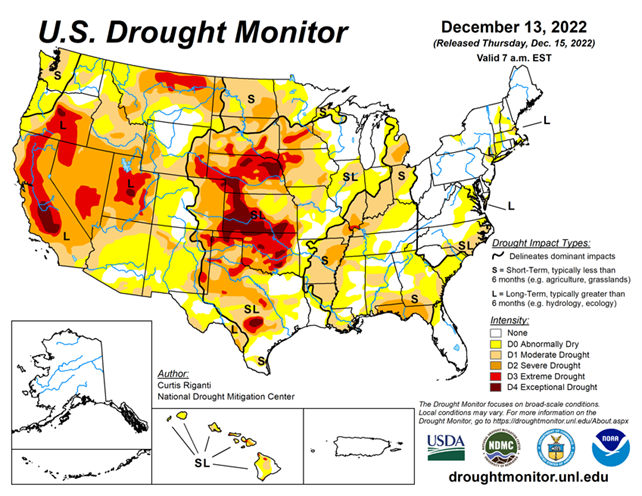 While much of the contiguous U.S. is still experiencing drought or abnormal dryness, several storm systems dropped large amounts of precipitation over the past week in the form of rain or snow, especially in California and from eastern Oklahoma through Tennessee. Since some of this precipitation fell near the Tuesday morning data cutoff, more analysis of the early week precipitation will be performed next week, when more data is available to analyze changes to ongoing drought conditions. In parts of the Great Lakes, Southeast, and northwest Kansas that missed out on recent precipitation, drought or abnormal dryness developed or worsened.

According to forecasts from the National Weather Service (NWS) Weather Prediction Center, as the weekend progresses into early next week, most areas east of the Rocky Mountains may expect near- or slightly below-normal temperatures. Meanwhile, a much-colder-than-normal airmass should build into the northern Great Plains. Widespread precipitation is forecast for the Great Lakes region through Monday evening, and from the southern Appalachians into the Northeast.