There were many drought improvements this week as storms hit most regions of the United States, particularly Texas and the South/Southeast. Meanwhile, isolated parts of the Midwest and Southeast saw degradations. 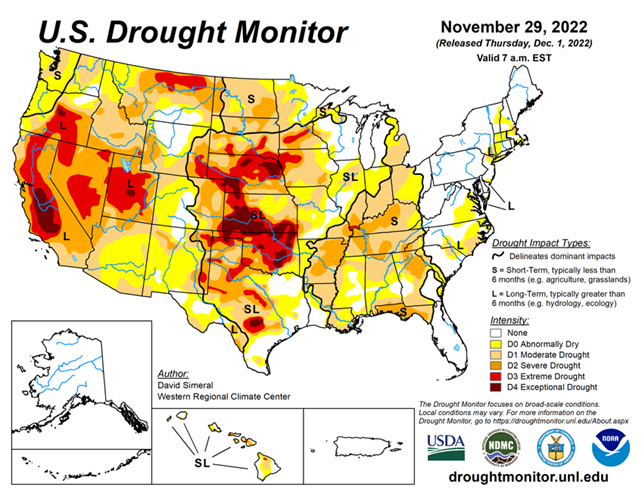 This U.S. Drought Monitor (USDM) week saw areas of moderate to heavy rainfall along the central and western Gulf Coast region as well as areas further inland in the eastern half of Texas, southeastern Oklahoma, and southwestern Arkansas. In these areas, targeted improvements were made in drought-affected areas. Additionally, an outbreak of severe weather, including severe thunderstorms with tornadoes and wind damage, impacted areas of the South (Louisiana, Mississippi, and Alabama) overnight on Tuesday (Nov 29), resulting in severe damage and loss of lives reported.

In the Southeast, isolated heavy rainfall accumulations led to improvements on the map in areas of Alabama, Georgia, and North Carolina. Elsewhere in the Southeast, short-term dryness over the past 90 days led to expansion of areas of severe drought in the Florida Panhandle, where rainfall deficits ranged from 3 to 9+ inches. In the Northeast, only minor changes were made on the map in areas of eastern Massachusetts and Rhode Island in response to precipitation shortfalls during the past 30–60-day period as well as below-normal streamflow activity and lack of groundwater recharge in areas of Cape Cod. In the Midwest, areas of moderate drought expanded in southern Michigan and northern Illinois where short-term precipitation deficits are negatively impacting soil moisture and streamflow levels.

Looking back at the last several months, the contiguous U.S. experienced its 8th warmest September-October period on record since 1895 in terms of average temperatures (+2.2-deg F anomaly) and maximum temperatures (+2.6 deg F), according to NOAA National Centers for Environmental Information (NCEI). Precipitation in the contiguous U.S. during the September-October 2022 period ranked as the 11th driest (-1.14-inch anomaly).

The NWS WPC 7-Day Quantitative Precipitation Forecast (QPF) calls for moderate-to-heavy precipitation accumulations (including heavy snowfall accumulations) ranging from 2 to 5+ inches (liquid) across much of the Cascades of Oregon and Washington, Klamath Mountains, Coast Ranges of Northern California, and the Sierra Nevada Range. In the Intermountain West, 1 to 3+ inch (liquid) accumulations are expected in central and northern Idaho ranges as well as in the Teton Range of Wyoming. Elsewhere in the conterminous U.S., heavy precipitation accumulations are expected in Kentucky and Tennessee (3 to 5+ inches liquid) as well as in areas of the Northeast including New York, New Hampshire, and Maine.

The CPC 6-10-day Outlooks call for a moderate-to-high probability of above-normal temperatures for the South, Southeast, and Mid-Atlantic regions, while much of the West, Plains, and Midwest are expected to be cooler than normal. Precipitation is forecasted to be above normal across the Pacific Northwest, Northern California, and across much of the Eastern Tier. Below-normal precipitation is expected in Florida.