Can Dogs catch a whiff of Bovine Respiratory Disease? 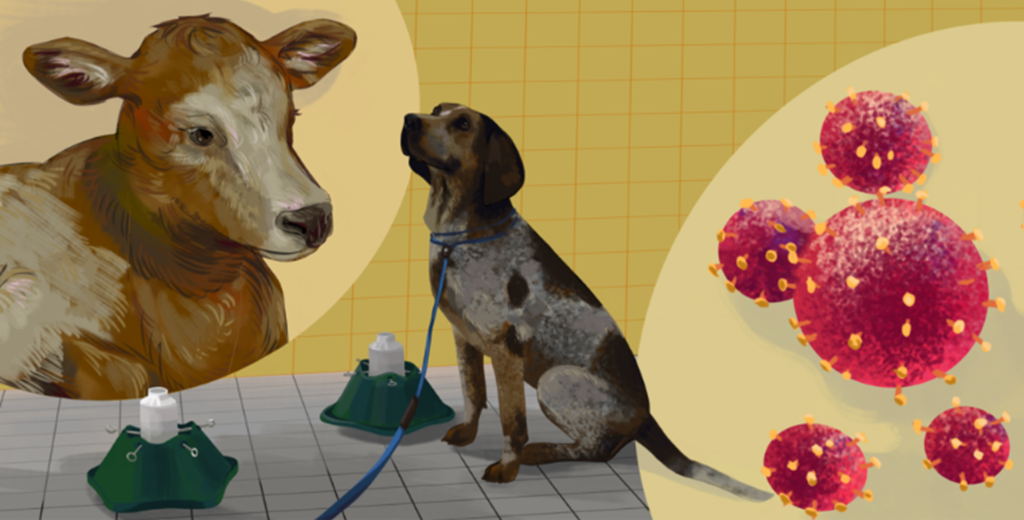 A Texas A&M AgriLife researcher is taking a page out of human disease research to see if dogs might be able to sniff out bovine respiratory disease, BRD, one of the largest health challenges for the feedlot cattle industry.

Courtney Daigle, Ph.D., an animal welfare specialist in the Texas A&M Department of Animal Science in the Texas A&M College of Agriculture and Life Sciences, and her doctoral student, Aiden Juge, are beginning the second round of training to determine if dogs can routinely and accurately detect BRD in cattle.

The results of the team’s first study were recently published in two major journals: Canine olfaction as a disease detection technology: A systematic review in Applied Animal Behaviour Science, and Using Canine Olfaction to Detect Bovine Respiratory Disease: A Pilot Study in Frontiers in Veterinary Science.

Canine olfactory capacity has been successfully used to detect and diagnose human diseases, and this team is looking to expand that success. For BRD, Daigle said their pilot testing helped illuminate what training, equipment and other parameters are needed to increase the rate of accurate predictability.

Now the team is starting their second study, utilizing cattle at the Texas A&M McGregor Research Center in Central Texas and guard dogs from the prison in Huntsville.

Daigle said this technology could revolutionize how antimicrobial treatment is applied in commercial beef production. Currently, cattle health is evaluated at the group level, resulting in mass administration of antimicrobials to an entire group, irrespective of individual animal health status.

“We propose that appropriately trained dogs will accurately and rapidly predict BRD risk in individual cattle, and communicate that information to humans in real time, resulting in a targeted approach to controlling BRD using antimicrobials,” she said.

This research could catalyze a paradigm shift in how feed yards use antimicrobials. Producers will utilize the dogs’ superior olfactory system for chute-side disease detection.

“A well-trained dog and handler positioned near the chute creates a scenario where the dog can quickly and calmly evaluate restrained cattle and signal a diagnostic decision to the handler,” Daigle said. “Metaphylactic application would then transition from group application to implementation on an individual animal basis.”

Treating only the animals that the dogs indicate truly need intervention would reduce drug cost and use compared to the current methods. Additionally, this will demonstrate that the livestock industry is demonstrating improved antimicrobial stewardship and promoting cattle welfare, while providing the global population with high-quality protein.

Knowing that dogs can identify humans and animals affected by a variety of diseases based on scent, Daigle’s team set out to determine if the canines’ olfactory systems can distinguish between patterns of volatile organic compounds produced by healthy tissue versus tissue infected with BRD. 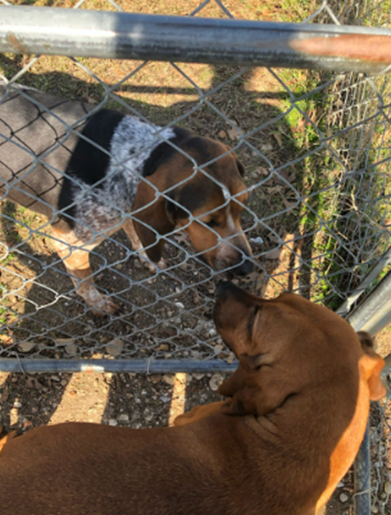 The two dogs were selected from the Department of Veterinary Pathobiology in the Texas A&M School of Veterinary Medicine and Biomedical Sciences. Nasal swabs were collected from 395 crossbred beef cattle at the West Texas A&M University Research Feedlot in Canyon between December 2020 and March 2021.

After sample collection, the cattle were monitored for three months. Samples were classified as positive if the source animal was treated for BRD at least three times or died after at least one treatment for BRD within 20 days of arrival.

Daigle said in the pilot study, the results were just slightly above chance for the dogs sniffing out nasal swabs from positive-testing cattle.

Samples were placed in jars in three base stations and then the dogs were allowed to sniff them to see if they could detect any positive samples.

Because of the complexity of BRD pathogenesis, if detection is reliant on a pathogen-specific odor, BRD may be more challenging than other diseases for dogs to detect, the team concluded. In the pilot study, they determined that varying field conditions, seasons and sex scent differences may have influenced the overall outcome, thus limiting the accuracy with which BRD could be diagnosed.

Because of these uncertainties, conducting further research with increased control of sample quality, more precise timing of sample collection relative to sickness, and greater sample uniformity is needed, Daigle said.

In this second round, two new dogs will be selected, and samples were taken from cattle that are homogenous in breed, sex and origin. The team collected both nasal and saliva samples to evaluate the impact of the sample type on detection accuracy.

“If these dogs can discriminate between samples from sick and healthy cattle under highly controlled conditions, then producers could have another tool in their cattle-management toolbox when it comes to detecting BRD,” Daigle said. “Also, these results may catalyze further research that could examine what compounds are responsible for those scent differences, leading to the development of sensors for BRD.”