Precipitation up and down the Mississippi River Basin has helped improve drought conditions, but much more is needed. Conditions in the Northwest also improved. However, parts of the Plains, eastern Midwest, and East saw degradations this week. 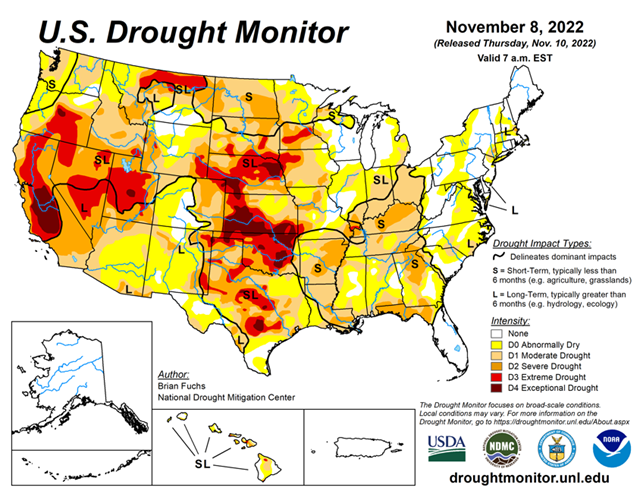 Over the next 5-7 days, it is anticipated that the impact of tropical storm Nicole over the east coast will be significant, bringing a great deal of precipitation from Florida to Maine during the next several days. A winter storm is impacting the northern Plains into the upper Midwest, bringing with it some significant snow while a frontal passage over the Plains will allow for some precipitation from Nebraska south into the lower Mississippi valley. Temperatures during this period look to be well below normal, with portions of the northern Plains 20-24 degrees below normal during this time. Warmer-than-normal temperatures will impact the Northeast and Mid-Atlantic, with temperatures 6-9 degrees above normal.

The 6–10 day outlooks show that temperatures are expected to be well below normal over most of the country, with areas of the Plains having the highest likelihood of recording below-normal temperatures. In contrast, Alaska is anticipating warmer-than-normal temperatures during this time. The greatest chance of above-normal precipitation is over the Southeast as well as through the Rocky Mountains while much of the central Plains and Midwest as well as the West have the greatest chances of having below-normal precipitation.