Drought and dryness have worsened in the Northern Plains and Upper Midwest this week but improved in other parts of the Midwest, Southern Plains, and South. The East saw degradations, while the West remained mostly status quo. 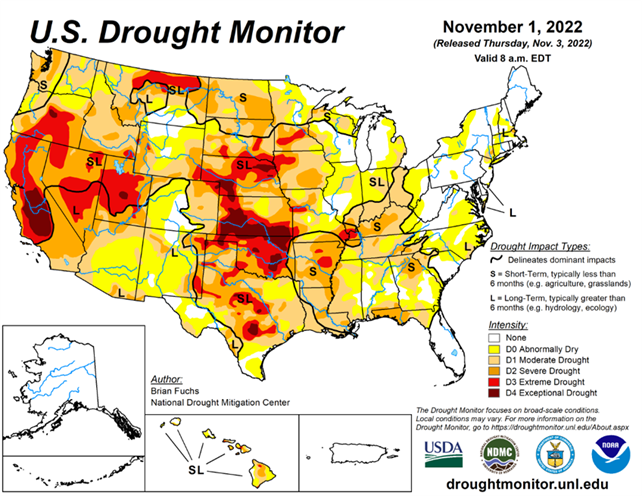 An active weather pattern over the Midwest to southern Plains brought the most precipitation to those areas this week. Warm and dry conditions dominated the northern Plains and the upper Midwest where some areas are experiencing “flash drought” conditions that are not as common this time of year. Dryness over the Southeast is starting to impact more of the region while an active pattern has started over portions of the Pacific Northwest, bringing some moisture over the western portions of the region. Temperatures were coolest over the West and southern Plains and warmest over the northern Plains and into New England.

Over the next 5-7 days, it is anticipated that the Pacific Northwest will remain in an active pattern, with greatest precipitation anticipated along the coast. The Rocky Mountains also look to stay in an active pattern, with up to an inch of precipitation anticipated over much of western Colorado and Wyoming as well as into Utah. A large frontal system is anticipated over much of the Midwest, with areas of the upper Midwest expected to receive over 1.50 inches of rain. The wet pattern over the South will continue as well with much of the lower Mississippi basin anticipating rainfall of over 1 inch. Temperatures during this period show much of the eastern U.S. having above-normal temperatures, with the greatest anomalies over the Great Lakes where high temperatures could be 15-18 degrees above normal. Cooler than normal temperatures are anticipated over the West with departures of 6-9 degrees below normal over California to Arizona.