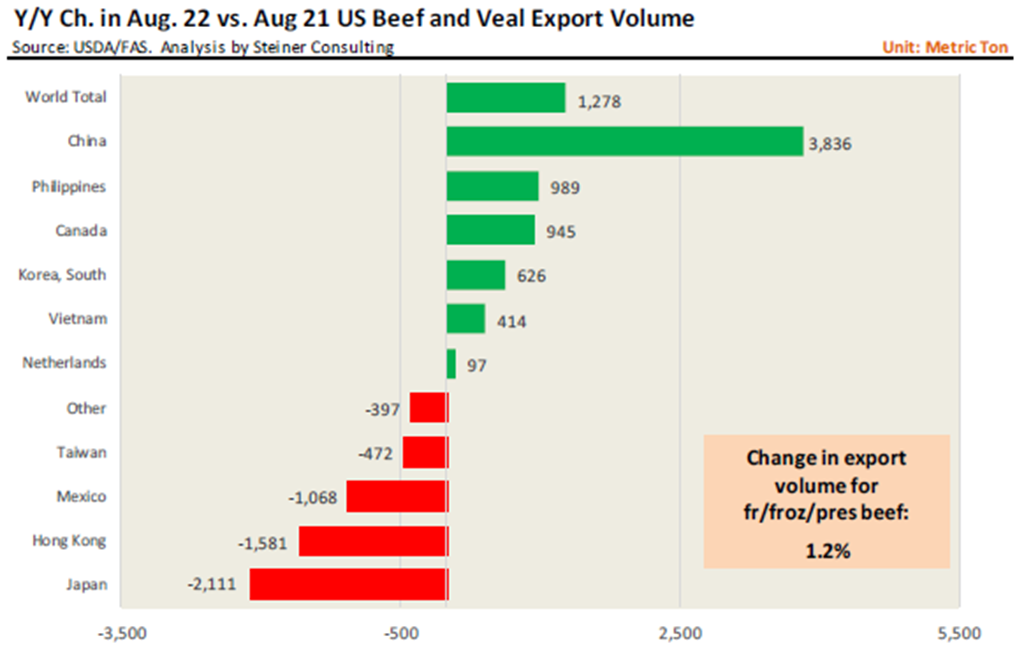 While China is no longer the driving force for US pork exports, it has  become increasingly important for beef exports. The increase in export shipments to China helped oﬀset the reduction in beef shipments to Japan, Mexico and Taiwan combined. Total shipments to China in August were 23,581 MT, a 19% increase compared to a year ago. The monthly volume was just slightly under the export volume to S. Korea and higher than exports to Japan. If we look at China/Hong Kong exports combined then this was the top market for US beef in August. For the year US shipments of fresh/frozen and processed beef to China were 163,150 MT, up 26k MT or 19% compared to a year ago.

This compares to almost no growth in exports to Japan and 7k MT increase in exports to S. Korea. Exports to the Chinese market have accounted for more than half of the overall growth in US beef exports so far this year. Beef and veal export value in August was $932.3 million, down $5.2 million or 0.6% compared to a year ago. It is quite impressive that beef export value is down less than 1% even as the beef cutout price in August was down almost 19% y/y. Weekly shipments of fresh/frozen beef in September were up 1.7% from a year ago, helped by robust shipments to S. Korea, Japan and Mexico.

Given the current pace of sales we would expect beef exports to be similar to year ago levels for the next couple of months.

US pork exports in August were down almost 4% from a year ago as higher shipments to S. Korea and Mexico were oﬀset by lower exports to Japan, Australia and a  number of smaller markets. Exports of fresh, frozen and cooked pork in August were 173,335 MT  (product weight), 3.9% lower than a year ago. Through August exports to Japan were down 11%  compared to the same eight month period a year ago and the decline accelerated in August. A strong US dollar and high pork prices over the summer likely contributed to the drop.