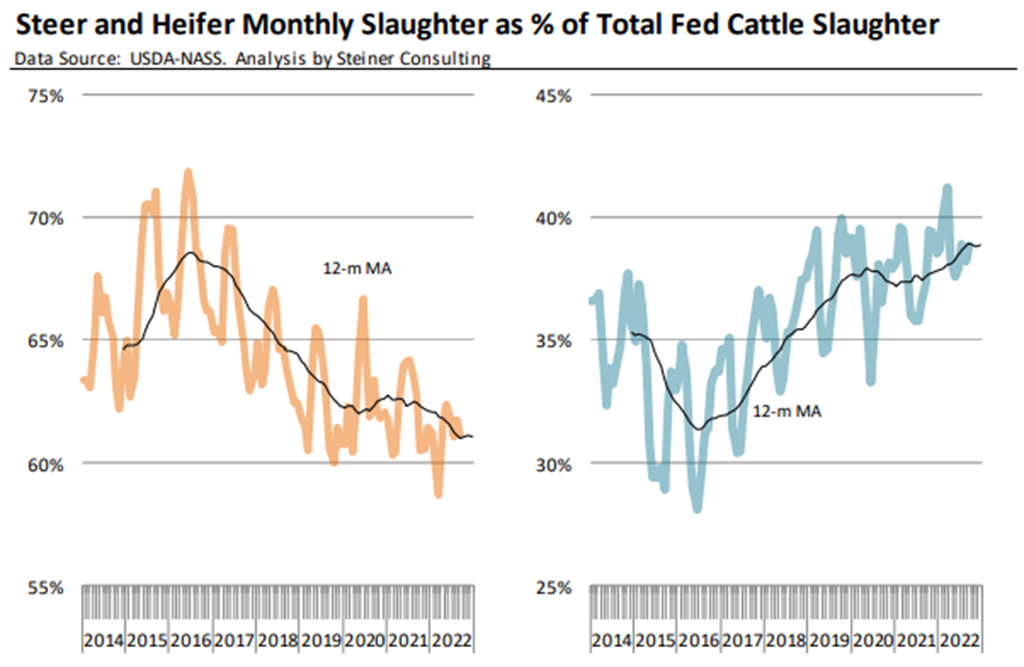 At the start of 2022 there was a fair amount of speculation about beef supply availability and prices. Smaller calf crops and assumption of normal weather led to expectations for lower beef production this year. This was reflected in the USDA estimates published last December that pegged beef output for 2022 at around 27 billion pounds, down about 900 million pounds or 3.2%. As we all now know the year played out a bit differently, in large part due to exceptional drought conditions in key production areas.

The most recent USDA forecast pegs beef production for 2022 at 28.2 billion pounds, above 2021 levels. The sharp increase in cow slaughter and aggressive placement of light weight feeders and female calves increased feedlot supplies and resulted in much higher than expected slaughter numbers.

Consider the following: through September some half a million more cattle were slaughtered than the same period in 2021. Steer slaughter during this period was actually down 157k head or 1.3%. Heifer slaughter, however, increased by 377k head or 5.2% and beef cow slaughter was up 341k head or 13.1%. In the short term that’s one way to keep up beef supplies ‐ send more female cattle to market.

The ramifications of this will be felt for years to come in the form of ever declining calf crops and shrinking cattle numbers. At some point supply will decline enough, maybe 2023, maybe 2024, where the pendulum will swing and producer profitability will improve enough to encourage more heifer retention. When that happens, we will see the opposite of what’s happening today. The double whammy effect of lower slaughter because of the smaller crop and due to a larger share of female calves retained in the herd.

September slaughter data continued to reflect this dynamic. Fed cattle slaughter last month was 2.216 million head, 84k head or 4% higher than the previous year. Conversations with market participants familiar with the situation suggest that the labor situation at meat processing plants has improved. This is evident in the big increase in fed cattle slaughter during the regular workday. We calculate that Mon‐Fri fed cattle slaughter averaged 98,193 head/day in September, 6.4% lower than the previous year. With more cattle processed during the regular work day Saturday slaughter has declined and in September it was on average 20% lower than the same period last year.

Today USDA will publish the results of its monthly survey of feedlots with +1000 head capacity and there is broad expectations that it will show the first decline in feedlot inventories for the year. If analysts are correct, the survey will also show a that the October 1 inventory of cattle with +120 days on feed was slightly lower than the previous year. Fed cattle slaughter remains robust through October. Eventually lower placements and the decline in market ready cattle supplies will limit fed slaughter.