Drought has led to record low levels on the Mississippi River and its two main tributaries, the Missouri and Ohio Rivers. Much of the entire Lower 48 states and Hawaii are experiencing dryness or drought, except for a few pockets and some parts of the East. 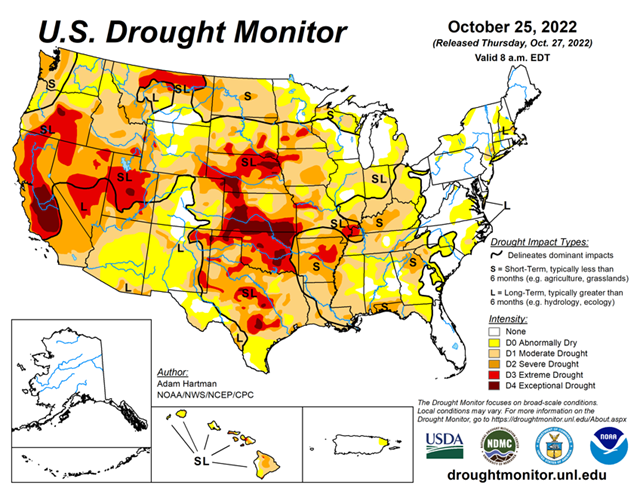 A large shift in the weather pattern occurred this week across the lower 48 states. Early in the week, low pressure exited the Great Lakes region, allowing temperatures to gradually moderate during the latter half of the week across portions of the eastern contiguous U.S. (CONUS). In the western CONUS, high pressure broke down as a strong storm system moved into the Pacific Northwest heading into the weekend. As this storm system moved eastward into the Great Plains through the weekend and leading up to Tuesday, October 25, many locations across the western and central CONUS experienced above-normal precipitation, with cooler than normal temperatures in the system’s wake. However, with surface high pressure early in the week followed by southerly flow ahead of the storm system, warm temperatures dominated much of the central CONUS for the week as whole, with above-normal average temperatures also extending northeastward into the Great Lakes and Northeast. Unfortunately, given the expanse of drought and abnormal dryness across the U.S., antecedent dryness led to another week of degradations for many not receiving rainfall, even in areas where temperatures were cooler than normal this week. Warm conditions and high winds further exacerbated conditions in drier areas across the Great Plains. Fortunately, in areas seeing the heaviest rainfall amounts, particularly across the Southern Plains and Ozarks, some improvements were also warranted.

During the next five days (October 27-31), the storm system that brought heavy rainfall to parts of the Southern Plains will bring rainfall to parts of the eastern Great Lakes and Northeast before exiting the U.S. The pattern will remain active across the remainder of the CONUS. However, much of the precipitation potential will be across the Southern Plains, extending eastward across parts of the Deep South, associated with a low pressure system that is forecast to intensify over the Southern Plains by the weekend before moving eastward through the remainder of the week. The Pacific Northwest is also expected to remain active through Monday, October 31. Additionally, near to below-normal temperatures are expected across the West Coast and much of the Southern Tier of the CONUS, along the predicted storm track. Farther north from the Northern Plains to the Northeast, predominantly above-normal temperatures are forecast due to a lesser influence from the storm track farther south.

The Climate Prediction Center’s 6-10 day outlook (valid November 1-5) predicts increased chances of below-normal temperatures and above-normal precipitation across the western half and two-thirds of the CONUS, respectively, associated with mean mid-level low-pressure. Meanwhile, mid-level high pressure favors above-normal temperatures from the Great Plains to the East Coast and drier than normal conditions from the Mississippi Valley eastward. In Alaska, a southerly storm track favors predominantly above-normal precipitation and is forecast to keep temperatures cooler than normal.