The “desert” Southwest remains wet—leading to drought improvements—while much of the rest of the Lower 48 is seeing drought develop or intensify. 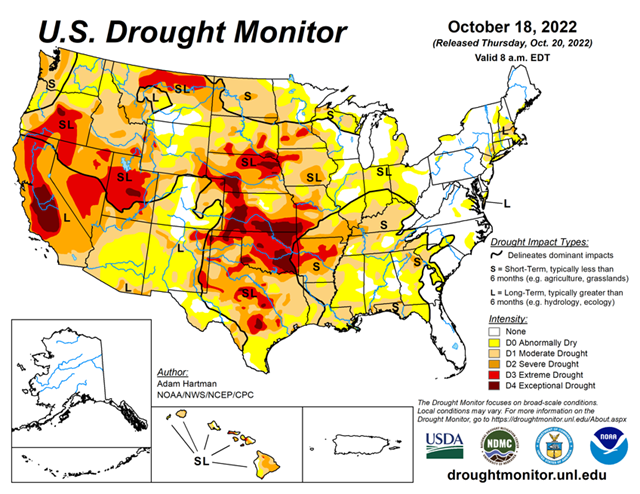 Much of the western half of the lower 48 states observed above-normal average temperatures this week. The Intermountain West and Pacific Northwest experienced the largest positive temperature anomalies, where widespread temperatures averaged 5°F to 10°F above-normal, with a few pockets exceeding 10°F above-normal for the week as whole. In addition to the above-normal temperatures, precipitation was also lacking for most areas from the Central and Northern Plains westward to the Pacific Coast, warranting drought deterioration. Parts of the Four Corners and Desert Southwest were the exception to this, as an area of low pressure meandered across the Southwest before being picked up by a frontal boundary dropping southward across the central U.S. This resulted in improvements to long-term drought conditions across parts of the Four Corners, with targeted improvements in the Southern Plains. Across the eastern half of the lower 48, frontal boundaries associated with a couple of strong low pressure systems in the Great Lakes brought heavy precipitation and cooler than normal temperatures to portions of the Great Lakes, Northeast, and Southeast. Therefore, a widespread mix of improvements and deterioration was warranted in many locations where the heaviest precipitation did and did not fall, respectively.

During the next five days (October 20-24), the storm system over the Great Lakes is forecast to move northeastward into Canada, but bring some additional light precipitation to parts of the northern and eastern Great Lakes. Surface high pressure is expected to dominate much of the eastern lower 48. However, a storm system is predicted to spin up off the coast of the Carolinas bringing the potential for rainfall along portions of the Eastern Seaboard. In the West, an active storm pattern is expected, with the potential for upwards of 3 inches of precipitation for the higher elevations of the Pacific Northwest and upwards of 2 inches across portions of the Intermountain West. The first of two systems is expected to intensify over the central U.S. leading up to October 24, bringing increased precipitation chances to much of the Great Plains and the Mississippi Valley. Below-normal temperatures are expected to shift eastward from the West Coast to the Great Plains, associated with the storm system entering the West during the weekend. Ahead of this system, southerly flow is expected to keep temperatures near and above-normal, with the largest anomalies shifting eastward from the Great Plains to the eastern U.S.

The Climate Prediction Center’s 6-10 day outlook (valid October 25-29), predicts increased chances of below-normal temperatures for southeastern Alaska and the western half of the contiguous U.S. (CONUS). Southerly flow and above-normal temperatures are favored from the Mississippi Valley to the East Coast. An active storm track is forecast across the Northeast Pacific, leading to above-normal precipitation odds across much of Alaska and extending into the Pacific Northwest. Low pressure is forecast to develop east of the Rockies bringing the potential for above-normal precipitation to much of the southeastern CONUS. Conversely, in the Southwest, below-normal precipitation is favored as the storm track is expected to remain farther northward.