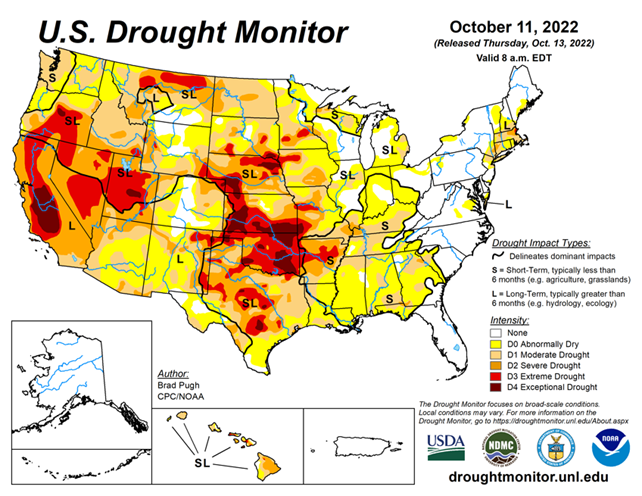 Following a drier-than-normal September for a majority of the contiguous U.S., this dry pattern continued into early October for many areas. Therefore, drought coverage increased and intensified throughout the Pacific Northwest, Great Plains, Ohio River Valley, and Southeast. From October 4-10, heavy rainfall (1 to 3 inches) was limited to the northern Mid-Atlantic, southern New England, and parts of the Southwest. New Mexico was especially wet this past week and this much above-normal precipitation extended eastward into west Texas. 7-day temperatures, ending on October 10, averaged above-normal across the West. Cooler-than-normal temperatures were observed from the Mississippi Valley to the East Coast with the first freeze of the season affecting parts of the Midwest.

From October 13 to 17, a series of cold fronts are forecast to progress southeastward across the central and eastern U.S. The heaviest precipitation (more than one inch), through Oct 17, is forecast across the Northeast and also extending from the lower Mississippi Valley west to New Mexico. Mostly dry weather is likely to persist across the north-central U.S. and Pacific Northwest. Above-normal temperatures are forecast to continue throughout the northwestern quarter of the U.S., while below-normal temperatures expand from the northern Plains to the Corn Belt and Ohio Valley.

The Climate Prediction Center’s 6-10 day outlook (valid October 18-23, 2022) strongly favors below-normal temperatures across the eastern and south-central U.S. with a persistence of above-normal temperatures over the West. A majority of the contiguous U.S. is likely to experience drier-than-normal conditions with the largest probabilities (50 percent) for below-normal precipitation forecast across the north-central Great Plains. Elevated probabilities for above-normal precipitation are limited to the Southwest.