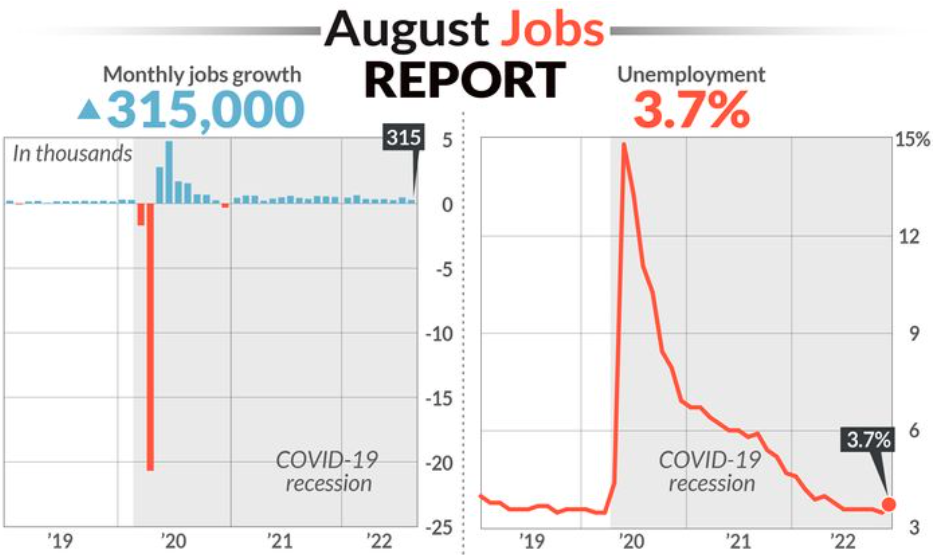 The numbers: The U.S. added a robust 315,000 new jobs in August, showing that businesses still have a big appetite for labor even as the economy slows and worries about a recession grow.

The unemployment rate, meanwhile, rose to 3.7% from 3.5%, the government said Friday, mostly because more people entered the labor force in search of work. That’s the highest jobless rate in six months.

The unemployment rate last month had matched a 50-year low set in 2019 shortly before the outbreak of the coronavirus.

U.S. stocks rose in premarket trades after the report. Investors concluded the Federal Reserve may be pleased that the labor market showed some signs of cooling off.

The Fed wants to see the tightest labor market in modern times loosen up to prevent high inflation from becoming ingrained in the economy. The shortage of workers is driving up wages and contributing to the highest inflation in 40 years.

The hourly pay rose a modest 0.3% in August to $32.36, matching the smallest increase in four months.

The rise in pay over the past year remained at 5.2%, however, and that’s still one of the fastest increases since the early 1980s.

Unless the labor market cools off substantially, investors worry, the Fed could raise interest rates high enough to potentially tip the economy into recession.

What would help ease the labor crunch is more people getting back in the job hunt. In another good sign for the Fed, the so-called participation rate jumped to 62.4% from 62.1%.

While the number of Americans with jobs finally returned to pre-pandemic levels this summer, the share of working-age people in the labor force is still surprisingly low.

Big picture: The U.S. economy appears to be gliding along at a steady pace of growth and is not in immediate danger of recession. The strong labor market is testimony to the resilience of the economy.

Yet the likelihood of a downturn is only going to increase the higher the Fed has to raise interest rates to quench inflation.

The labor market will be a good cue on how far the Fed has to go. The Fed would have more leeway to slow its pace of interest rate rises if hiring slows to 200,000 a month, the unemployment rate rises to above 4% and other contributors to high inflation continue to taper off.

No major industry reported a decline in employment, a sign of broad strength in the labor market.

Looking ahead: “An uptick in unemployment along with a modest increase in the participation rate means that the labor market in August is less tight than it was in July,” said Jeffrey Roach, chief economist at LPL Financial. “Overall, this is a good report for those concerned about inflationary impacts of a tight labor market.”

“So was this good or bad? Both,” said senior economist Jennifer Lee of BMO Capital Markets. “This does not change the view that the labor market is ‘clearly out of balance,’ to quote the Fed chairman, and will keep the central bank tightening into year-end.”