While Hurricane Ian is battering Florida, drought and dryness are intensifying and spreading across the Plains into the Midwest and South. Meanwhile, the Northeast saw some improvements this week. 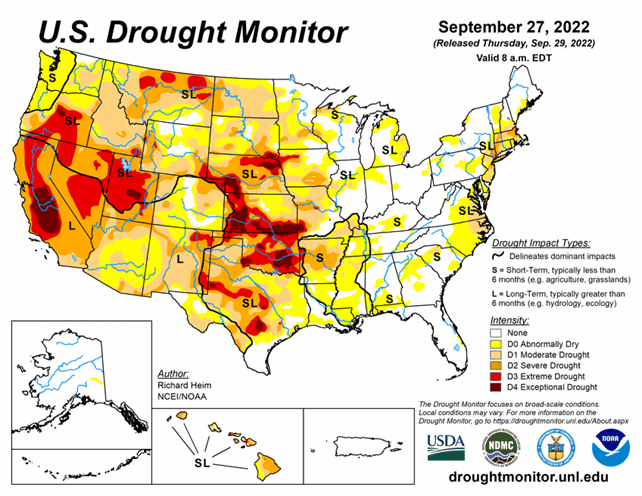 Two upper-level weather systems danced across the contiguous U.S. (CONUS) during this U.S. Drought Monitor (USDM) week (September 21-27). One partner of the pair was an upper-level low pressure trough which twirled from the West Coast to the northern Plains then migrated to the Northeast. The other partner was a high pressure ridge. As they did a kind of do-si-do, the ridge swung from the southern Plains to the western CONUS. Other players danced at the periphery – Hurricane Fiona moved across the Canadian Maritime Provinces, spreading rain over New England at the beginning of the week, while Hurricane Ian brought rain and wind to southern Florida as it bore down on the state just as the week ended. The high pressure ridge brought hot temperatures to the southern states at first, then to the West later in the period. The trough generated a storm track across the northern states, then sent a large cold front into the Southeast as the period ended. Monsoon showers joined in over the Southwest in these waning days of summer. The end result was a weekly precipitation pattern that was wetter than normal over parts of the West, southern Plains, Great Lakes, Northeast, and southern Florida. The rain missed large parts of the West, which received little to no precipitation, and much of the Plains, Mississippi to Ohio Valleys, and Southeast to Mid-Atlantic states were drier than normal as well. Temperatures for the week averaged warmer than normal over the southern Plains to Lower Mississippi Valley and across parts of the Southwest and Northwest. The week ended up cooler than normal from the northern Plains to Northeast and into parts of the Southeast. The hot temperatures and continued dry conditions, especially in the South, further dried soils. According to the U.S. Department of Agriculture (USDA), national topsoil moisture rated very short to short (dry or very dry) reached 54%, a high for the year to date and very close to the recent maximum of 56% achieved on October 18, 2020. This is the third year in a row that a peak greater than 50% has occurred. Drought and abnormal dryness contracted where it rained in the Southwest, Northeast, and southern Florida. Drought and abnormal dryness expanded where it didn’t rain, including the Northwest, Great Plains to Mississippi Valley, and Mid-Atlantic states.

During the two days after the Tuesday morning cutoff time for the USDM, Hurricane Ian made landfall across Florida and an upper-level trough moved across the Northeast, with these systems bringing rain to these areas, while another Pacific trough moved into the Pacific Northwest. Dry high pressure dominated most of the rest of the CONUS. For the period September 29-October 4, the Pacific trough will move across the Pacific Northwest and northern to central Rockies, giving these regions 0.5-1.5 inches of rain with locally up to 2 inches. The remnants of Ian will be drawn over the Southeast, spreading a large area of 1-5 inches of rain across the Southeast to Mid-Atlantic states, with locally over 10 inches in parts of Florida. Ian’s rain will stretch into the eastern Tennessee Valley and southern New England, where up to an inch of rain is expected. Little to no precipitation is forecast for the rest of the CONUS where high pressure ridging will dominate. Temperatures are predicted to be warmer than normal in the West to Great Plains and cooler than normal in the Southeast to Mid-Atlantic states.

For the period October 4-12, odds favor above-normal precipitation across most of Alaska and in the Four Corners states, with below-normal precipitation over the Alaska panhandle, northern portions of the West, and much of the Plains to East Coast. The West and Alaska panhandle are expected to get wetter as the period progresses. Odds favor warmer-than-normal temperatures for most of Alaska and most of the CONUS, except the period may begin cooler than normal along the East Coast.