Flash drought continues to hammer the Southern Plains, as well as southwestern Nebraska and northeastern Colorado, where Exceptional Drought (D4) was introduced. Parts of Massachusetts and Rhode Island are now in Extreme Drought (D3), according to the latest U.S. Drought Monitor. As of August 9, 2022, 41.97% of the U.S. and 50.11% of the lower 48 states are in drought. 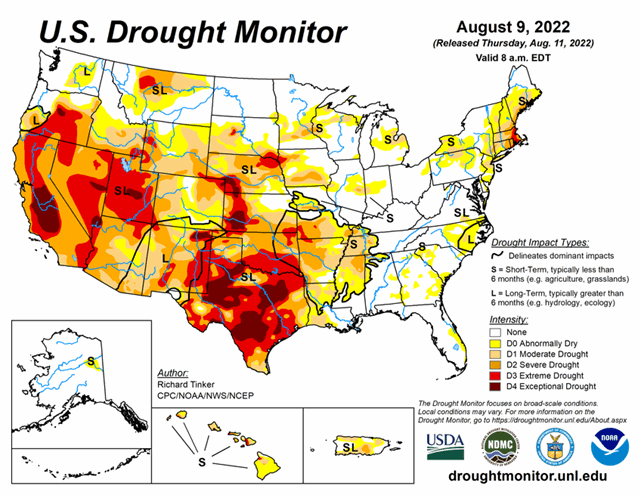 Precipitation varied widely across the Lower 48 this week. Across the interior West, heavy monsoon rains set records in some locales, with tropical moisture streaming much farther north and west than normal (through southern Montana, the Great Basin, and parts of the Sonoran Desert). Death Valley, CA set an all-time record for 24-hour rainfall, being doused with 1.46 inches during August 5 and 6. The average annual rainfall in Death Valley is less than 2.5 inches, and the 24-hour total makes August 2022 the wettest month in Death Valley since February 2010, and more than half of all calendar years bring less rain than that 24-hour total.

Farther east, many areas from the Mississippi River eastward through the Piedmont and Middle Atlantic States recorded moderate to heavy precipitation. Most areas from southern Missouri and northeastern Arkansas through central Illinois recorded over 1.5 inches of rain, as did parts of the Tennessee and southern Ohio Valleys, the Upper Midwest and western Great Lakes Region, the Central Gulf Coast, and northern Maine. In other areas from the Mississippi Valley eastward, heavy rain was less widespread. Still, numerous patches of land across the Upper Midwest, the middle Mississippi Valley, the Ohio Valley, and the Gulf Coast east of Texas received over 3.5 inches of rain, with isolated totals of 6 to locally 11 inches reported in a swath from the middle Mississippi and lower Ohio Valleys northward through the Upper Midwest and western Great Lakes Region. In contrast, many areas across these regions recorded only a few tenths of an inch of rain or less, with tight gradients between heavy rain and lesser amounts common. This variable rainfall pattern had a similar effect on areas of dryness and drought, with deterioration noted very close to improvement in many cases, and only a few broad swaths with a consistent pattern. Looking at the western half of the Lower 48, outside the areas affected by the monsoon, much drier conditions prevailed, though there were a few small areas recording moderate to heavy rainfall. Little or no rain fell on the central and southern Great Plains, much of the central Rockies, and the Far West. Temperatures averaged over 3 deg. F above normal in a large area across the central Rockies, most of the Plains, and the northeastern quarter of the country, exacerbating dryness in areas that missed the heavier rains.

Above-normal temperatures – with the potential for excessive heat – should cover the central Plains, northern half of the Rockies, the Intermountain West (except where the monsoon is active), and the Pacific Northwest during August 11-15, 2022. The largest departures from normal are expected in the central Plains, the northern Rockies, and part of the northern Intermountain West averaging 4 to 8 deg. F above normal. In the western U.S., the only area expected to be somewhat cooler than normal are in the southern Rockies, Southwest, and Great Basin, where the robust monsoon will continue, keeping temperatures down. It should also be somewhat cooler than normal from the Mississippi River to the Appalachians, possibly spilling over into parts of the Atlantic Coastal Plain.

Most of the Lower 48 should be drier than normal, with several tenths of an inch falling at best. But there are significant exceptions; A very robust Southwestern Monsoon should be in place through the period, bringing moderate to heavy rain to the Southwest, The eastern Great Basin, the western half of Colorado, and most of Wyoming. Portions of central Arizona, southwestern Utah, and northern Wyoming are forecast to receive 1.5 to 3.0 inches of rain, with locally higher amounts. The only other extensive areas where more than 0.5 inch is expected are south-central through southeastern Texas, the immediate South Atlantic Coast, and most of the Gulf Coast. But only east-central Texas should record over 1.5 inches of rain, except along parts of the immediate Gulf Coast. Little or no precipitation is anticipated along the western tier of the Lower 48, across a large part of the central Plains, and through much of the Upper Midwest north of the Ohio River. Little or no precipitation is also expected in southern New England. .

The Climate Prediction Center’s 6-10 day outlook (valid August 16-20, 2022) favors above-normal temperatures across a large part of the Lower 48 from the Great Basin and Southwest eastward through the lower Mississippi Valley, through almost all of the Appalachians and Eastern Seaboard. But wet weather is only weakly favored from the lower Mississippi River to the southern Atlantic States and across the Appalachians. Odds favor subnormal precipitation around the Great Lakes and across the northern tier of the Lower 48 from western North Dakota to the Pacific Coast.

Odds significantly favor below-normal temperatures across the Ohio Valley and central Appalachians, with somewhat lower odds from the Upper Southeast northward through the middle Mississippi Valley, Great Lakes Region, Northeast, and southwestern New England. Farther west, slightly enhanced chances for milder than normal temperatures extend across the central Plains and the central and southern Rockies. Meanwhile, there is a large tilt of the odds toward warmer than normal temperatures – with the potential for excessive heat – from central California, the northwestern Great Basin, and the northern Intermountain West to the Pacific Coast and the Canadian border. The chances for warmer than normal weather exceed 80 percent across interior sections of Washington and Oregon, and adjacent Idaho. Enhanced chances for warmth are less dramatic through the rest of California, the Great Basin, and the northern tiers of the Rockies and Plains. There are also slightly enhanced chances for warmer than normal weather extend across most of Texas, the lower Mississippi Valley, the immediate Gulf Coast, and Florida.