As expected, Texas saw major improvements after the rain and floods, as did the Southwest and South/Southeast. The northern U.S. saw pockets of degradation, as well as a few other areas (Florida). As of August 23, 2022, 39.3% of the U.S. is in drought. 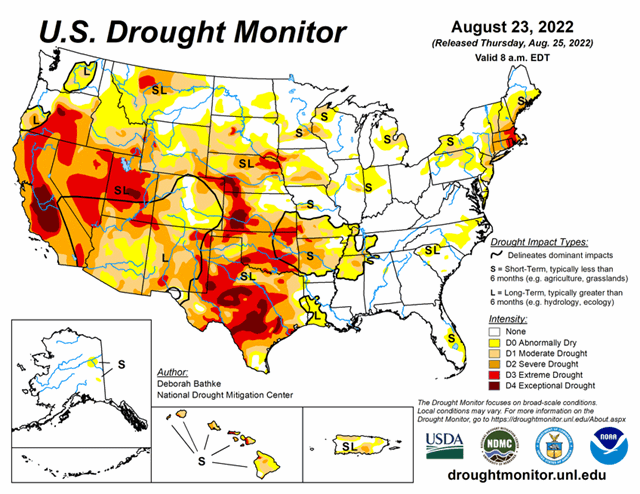 Record-breaking rainfall led to aggressive improvements in drought conditions across parts of the South. The heavy rainfall and flooding led to communications outages at the National Weather Service office leaving climatologists without access to important data and tools needed to fully analyze the effect of this event. The magnitude of this event meant prioritizing improvements on this week’s map in these areas and in the Southwest, where the Monsoon season remains active. Drought expanded in the Northwest was warm, dry conditions continued across the region. The Midwest, Southeast, and Northeast saw a mix of improvements and degradations.

The National Weather Service Weather Prediction Center (valid August 25 – August 28) calls for rainfall over parts of the South, the Southwest, the Northern Rockies, Upper Midwest, and Northeast. Meanwhile, dry weather is expected to continue across the drought-stricken areas of the Pacific Northwest, California, the Central Great Basin, and Central Plains.

Moving into next week (valid August 30 – September 1), the forecast calls for more rain across Texas, Oklahoma, and much of the eastern half of the CONUS. At 8 – 14 days, the Climate Prediction Center Outlook (valid September 1 – September 7) calls for above normal temperatures across the West, High Plains, Upper Midwest, East Coast, and interior Alaska. Below normal temperatures are predicted across southeast New Mexico, Texas, and Southern Oklahoma. Below normal precipitation is favored across much of the northern tier of CONUS. Above normal precipitation is favored for the southern tier, from New Mexico eastward.