Inches of precipitation fell on parts of the Southwest and Texas—and more rain is coming. While drought conditions in parts of the southern U.S. improved this week, the Northwest, Northern Rockies, and Northern Plains saw degradations. And the Northeast continues to worsen. As of August 16, 2022, 41.23% of the U.S. and 49.18% of the lower 48 states are in drought. 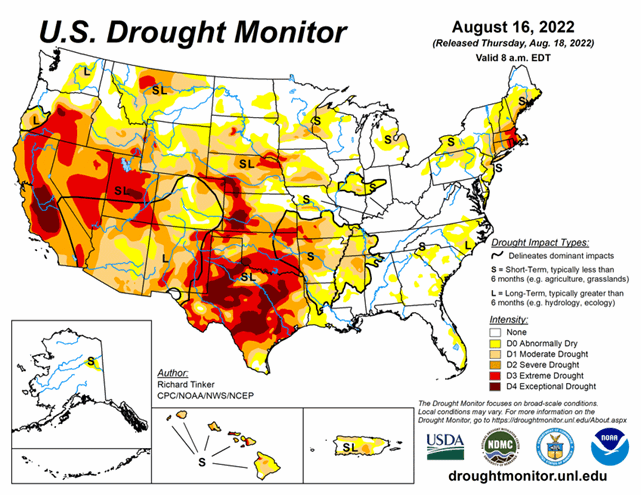 Precipitation again varied widely across the Lower 48 this week, which is not unusual during the summer. Across the interior West, monsoon rains were not as intense as last week, but remained heavier than normal. Several times the normal amount soaked most areas in the western half of the Four Corners Region, much of Nevada, southeastern California, reaching as far north as southeastern Oregon and Wyoming. Other areas receiving widespread heavy rains (and thus some improvement from recent dryness) included Deep South Texas and northwestern Nebraska. Parts of Deep South Texas recorded over 10 inches of rain, and 2 to 3 inches were common across northwestern Nebraska. Elsewhere, relatively narrow swaths of moderate to heavy rain dampened parts of the middle Mississippi Valley, Upper Midwest, and Great Lakes Region.

Meanwhile, a broken pattern of moderate to heavy rain covered roughly the southeastern quarter of the contiguous 48 states. The higher amounts were in the 2 to 3 inch range though some small, highly-isolated areas recorded a bit more. In contrast, light precipitation at best fell on the Northeast, which teamed with abnormally high temperatures to induce significant and widespread intensification. Other areas observing light rain at best included part of the Upper Midwest, the north-central and south-central Plains. Conditions were seasonably dry along the West Coast.

The next five days could see heavy rainfall and improvement across a large part of northern Texas and southern Oklahoma eastward along the Arkansas/Louisiana border. Amounts of 2 to 3 inches are expected to be widespread here, with small areas south of the Texas Panhandle and in southeastern Oklahoma expecting over 4 inches of rain. Farther west, the robust monsoon looks to continue unabated. Between 2 and 4 inches are expected over southern sections of the Four Corners Region. But monsoon moisture is not expected to bring tropical moisture and heavy rainfall north of the central Rockies. Farther east, the rest of the southern tier of states are expected to get near or above an inch of rain, with bands of heavier rainfall expected in the Carolinas, southeastern Georgia and the central Gulf Coast. Much of the Upper Midwest and northern Ohio Valley should get several tenths to nearly 2 inches of rain, although the highest totals should be highly isolated. In stark contrast, little or no rain is expected over the contiguous states to the north and west of Kansas. In New England, where dryness has been intensifying rapidly, only a few tenths of an inch of rain are forecast in the areas of moderate to extreme drought along and near the I-95 corridor. Well above average temperatures will exacerbate dryness from the central Rockies northward and westward. Five-day average temperatures could exceed +9 deg. F above normal over the Great Basin and northern Intermountain West. Meanwhile, the southern tier of states – where heavy precipitation is expected – are forecast to average at least 3 deg. F below normal. Temperatures will be close to normal elsewhere, though they could sneak a few degrees above normal in part of New England.

For August 23-27, Odds favor a continuation of above normal temperatures from the Great Basin northward to Canada and westward to the Pacific Coast. In addition, enhanced chances for above-normal temperatures cover the Northeast, the eastern mid-Atlantic region, the immediate south Atlantic Coast, and Florida. Subnormal temperatures are favored from the southern half of the Rockies eastward through the central Plains, middle Mississippi Valley, lower Ohio Valley, and interior Southeast. At the same time, above-normal precipitation is at least slightly over a large area covering the desert Southwest, Intermountain West, Rockies, central and southern Plains, the lower half of the Mississippi Valley, the Ohio Valley, the lower Midwest, Appalachians, and most of the Eastern Seaboard from Georgia through southern Maine. The best chances for abnormally heavy rain extends from northeastern Texas and eastern Oklahoma northeastward through the Tennessee and adjacent Ohio Valleys.