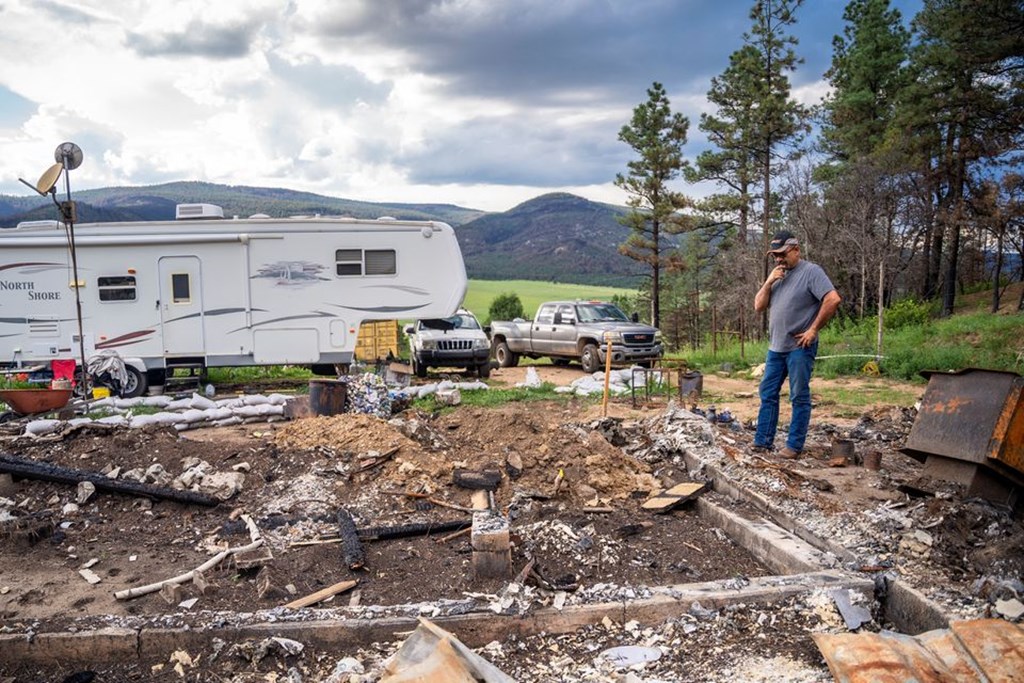 Daniel Encinias stands in the remains of the home he built, which was lost in a wildfire sparked by U.S. Forest Service (USFS) prescribed burns supposed to reduce wildfire risk and which later went out of control, in Tierra Monte, New Mexico

TIERRA MONTE, N.M., July 31 (Reuters) - After the U.S. government started the largest wildfire in New Mexico's recorded history in April, it is asking victims to share recovery costs on private land, jeopardizing relief efforts, according to residents and state officials.

The blaze was sparked by U.S. Forest Service (USFS) prescribed fires to reduce wildfire risk. The burns went out of control after a series of missteps, torching 432 residences and over 530 square miles (1373 square km) of mostly privately owned forests and meadows, much of it held by members of centuries-old Indo-Hispano ranching communities.

"Today I'm announcing the federal government's covering 100% of the cost," President Joe Biden said during a visit to New Mexico in June. Biden was announcing a disaster declaration that covered debris removal and emergency protective measures.

But federal cost-sharing statutes on other federal relief programs are limiting Biden's authority and exposing holes in the government safety net meant to help survivors and restore landscapes.

It is a system more Americans will turn to as extreme fires and flooding become the climate change norm.

Biden's measure was meant to bridge FEMA relief and a congressional bill that may pass in the fall to provide 100% federal compensation for losses from the so-called Hermit's Peak Calf Canyon fire.

"I DIDN'T CAUSE THIS DAMN FIRE"

Daniel Encinias was among survivors who met Biden and was told by U.S. Department of Agriculture (USDA) officials he would get timely support at little or no cost.

He, his wife Lori, three teenage children, four dogs and eight cats are living in a camping trailer next to the ashes of their home in Tierra Monte, 35 miles northeast of Santa Fe.

Encinias submitted an application to the USDA's Natural Resources Conservation Service (NRCS) to fix his well, but was told to share 25% of costs based on a federal statute that could not be waived as it did not fall under Biden's declaration.

So like many fire survivors in this low-income area who have no insurance, the rancher and retired electrician did the work himself.

"Why the hell am I going to pay anything when I didn't cause this damn fire?" said Encinias, 55, as he fed his cattle hay he was forced to buy after his baler was torched.

An official for the NRCS' local office in Las Vegas, New Mexico, where Encinias applied for support directed questions to the national office. Officials there did not respond to requests for comment.

The White House did not respond to a request for comment.

That has left locals, state officials and federal agencies counting on cost shares to be dropped and passage of the congressional bill.

Democratic Representative Teresa Leger Fernandez sponsored the legislation which passed the House and will probably need help from Republicans in the Senate. The office of Senate minority leader Mitch McConnell did not immediately respond to a request for comment

Leger Fernandez is in talks with the USDA and White House on dropping cost shares and helped negotiate a waiver with the NRCS for flood mitigation work on private lands.

"The federal government burns your house down so they are responsible in my mind to pay 100% of the cost of rebuilding," said Leger Fernandez

Support cannot get to the 45-mile-long disaster area fast enough.

The blaze burned around 170 acres (68.8 hectares) of rancher Kenny Zamora's forest. His pastures in El Turquillo are covered with up to 2 feet of sludge after monsoon rains triggered debris flows on hillsides that no longer absorb water. The torrents have twice knocked down fences.

A retired employee of the USDA's Rural Development agency, Zamora applied for support from the USDA's Farms Service Agency (FSA) to feed his livestock.

The FSA office in Las Vegas told him he was not eligible. USDA officials told him the EFRP for the area has yet to be funded. He is paying for recovery work himself.

"If you don't have insurance you're pretty much on your own," said Zamora, 59, who like Encinias is considering joining a massive civil case that may be filed against the USFS.

Climate change is worsening wildfires as ecosystems no longer have natural protections such as cooler nights to slow their spread. read more The destroyed landscapes are also less able to handle other disasters, such as floods.

Two women and a man died after a flash flood swept through the burn scar northeast of Las Vegas on July 21.

FEMA has so far granted $4.2 million to 1,164 fire survivors, marking an average payout of $3,600. New Mexico Governor Michelle Lujan Grisham on Thursday said FEMA granted her request to extend Biden's declaration to residents who have suffered damage from flooding and debris flows in wildfire burn scars.

For now, Encinias' family is getting by on a $37,000 maximum payout from FEMA for the loss of their 5-bedroom home. They also lost eight acres of forest, farm machinery and cars.

"I'm hoping that finally something works out where it helps the people," said Encinias.