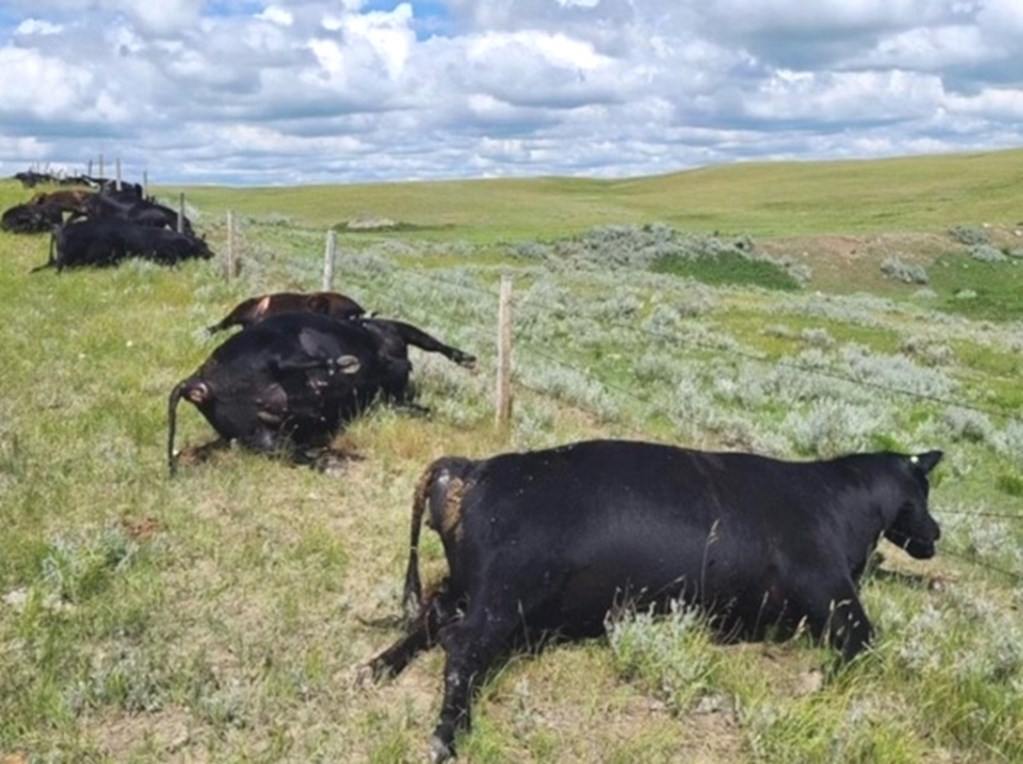 A family in southwest Saskatchewan is facing both a financial and emotional loss after 28 of their cattle were struck and killed by lightning.

“It’s probably the worst thing I’ve ever seen on the farm,” Glen Briere, the farm owner, said through tears.

“When I got there it made me sick to my stomach to see what I had seen.”

Briere is a fourth generation farmer. His family farm was established in 1912 and is located near Mankota, Sask. located about 200 kilometres southwest of Moose Jaw.

Glen and his wife were out of town over the weekend. His brother-in-law was checking on the cows on Sunday morning when he made the discovery.

There were 14 cows, 13 calves and one herd sire dead along a fence in their pasture.

“It was Friday night when that storm we had had very severe lightning,” Glen said. “[The lightning] most definitely hit the fence.”

In photos and video, many of the animals can be seen intertwined with the fence. Glen said some appear to have been struck and blown away from the fence.

“A guy tries to build up for years and years. You get a cow herd built up and then something like this comes along. Naturally it always takes some of the better ones, which happened here,” Glen said.

Darla, Glen’s wife, said they are still in shock.

Despite the loss, the family is trying to stay positive.

“We didn’t lose a [human] life,” Darla said. “We just keep thinking that there is worse things and these things can be replaced essentially.”

Before this incident, the Brieres had an 80 head herd.

“Dad finds the best herd sire that he can, buys it that year, builds up his genetics. It’s a very strategic business on what animals he breeds, that bull to and what their calves are,” Chelsey said.

She said all animals on the Briere’s farm are registered with the Canadian Angus Association. They undergo DNA testing to keep track of their genetic make-up.

Every March, the family holds a bull sale to sell what they’ve bred.

“What my parents make their money on every year is the bull sale,” Chelsey said. “[Dad] lost 13 calves and 10 of them were bull calves that were supposed to be in the sale this March.”

In addition to losing income that way, some calves that are still alive are left without a mother.

“Each cow that died had a calf that will now have to ween off its mother early, so it just won’t quite be given the chance to grow as much as it could have,” Chelsey said.

Most of the animals that died were not insured, except for the bull. The family is researching any resources that might be available to help recoup some of the loss.

They said they do have AgriStability coverage and are hoping that will help.

According to the Sask. Crop Insurance Corporation website, AgriStability is a risk management program designed to help farms that are facing large margin declines by production loss, increased costs or market conditions.

The Brieres are now working on clean up. They’ve rented equipment to move the cows and to dig an area where they can be buried.

They said support from family members and the community is helping them get through this.

“Dad’s phone has been ringing off the hook with people calling and offering different things and just saying how they support us and are here for us if we need anything,” Chelsey said.

“It’s been really nice to have that.”