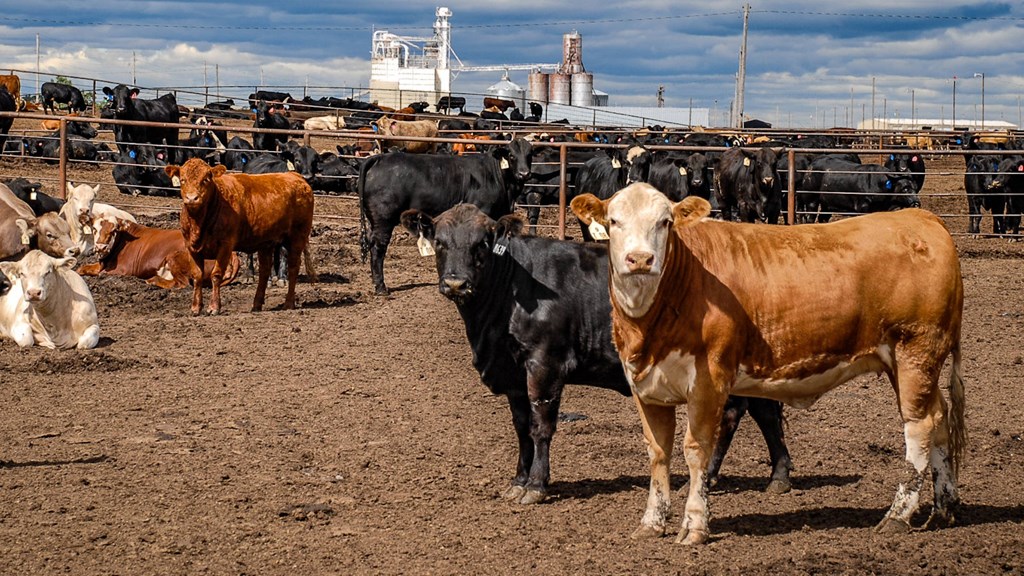 Fed cattle slaughter last week was estimated at 520k head, 1.1% higher than the previous year and we think slaughter this week will be close to those levels again and about 2% higher than a year ago. During the four full July weeks, fed cattle slaughter is estimated up 2% compared to the same four weeks in 2021. And yet, we still think that when the next feedlot survey is released in August, marketings for the month of July will be down from the previous year. Monthly figures are often skewed by the number of Saturdays and Sundays included and July 2022 has one more Sunday than July 2021. That will be enough to result in lower July total slaughter. Our current guess is that feedlot marketings for July will be down about 2.5‐3.0% compared to last year. Because of that, the July feedlot turnover rate (ratio of marketings to inventory of cattle with +90 days on feed) to under 30%, a fairly low number for this time of year. 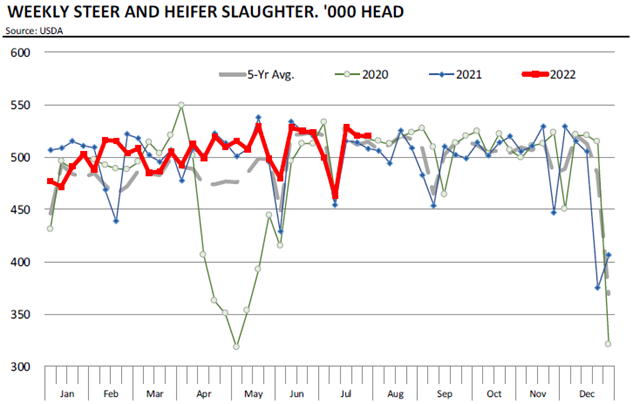 Feedlots are trying hard to get more current and become more competitive. That’s proving to be a slow grind. Drought earlier in the year accelerated the placement rate. Placements in June were also on the high end of expectations. The most recent USDA update pegged 59% of the US cattle inventory in an area affected by drought. And the inventory of cattle in areas with severe drought has been increasing. Different from places like Australia, for instance, where drought means cattle that would normally finish on pasture have to go to slaughter, in the US producers have the ability to send young cattle to the feedlot. Feeder values have rallied in recent weeks but deepening drought conditions could erase some of those gains, at least in the near term. A decline in heifer retention also means more female calves are going into the feedlot, adding to the total number available. Despite a smaller cow herd the last couple of years and smaller calf crops, market ready supplies remain ample. The inventory of cattle with more than 120 days on feed on July 1 was 163k head or 3.9% higher than the previous year. As a result packers are running full schedules and daily fed slaughter of 98‐99k head is fairly routine. 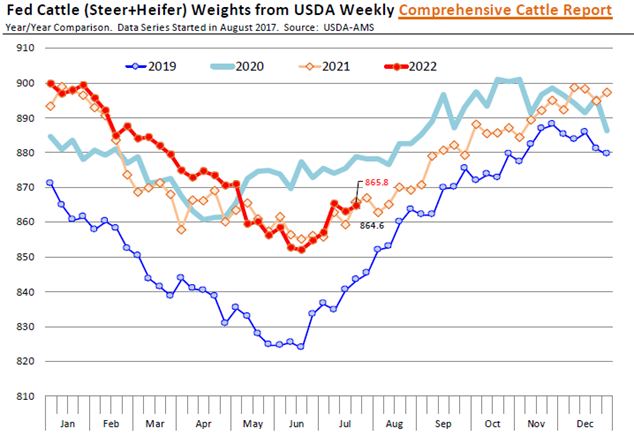 The average weight of fed cattle coming to market has also started to move higher, which is normal for this time of year. Different from the hog market, where the producer has become especially current and is now commanding premiums, feedlot ca􀆩le weights are running right on track with last year. The current feedlot supply of market ready cattle, high spot feed prices and adverse weather conditions in some areas help explain why fed catte values have lost ground recently even as wholesale prices have been steady. Fed cattle for delivery in the next 2 weeks were down $3/cwt (dressed basis) from previous week and down $9/cwt (dressed) or 4% from a month ago. Packer margins have improved as a result, at least in the very near term. 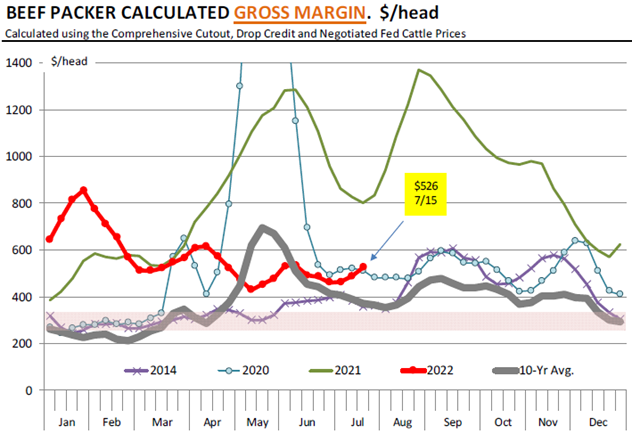