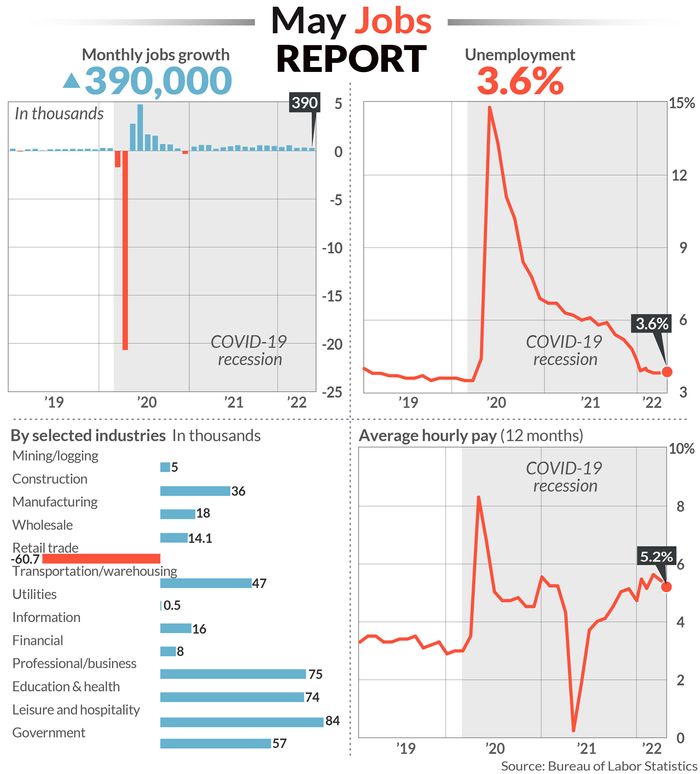 The numbers: The U.S. added a stronger-than-expected 390,000 new jobs in May, signaling the labor market and broader economy are still going strong despite some fraying around the edges.

Economists polled by The Wall Street Journal had forecast a smaller increase of 328,000 new jobs after reports leading up the government’s employment survey had hinted at slower hiring.

The increase in employment was the smallest in 13 months. Yet economists say employment growth was bound to slow as the U.S. recovered most of the jobs lost during the pandemic.

The unemployment rate was unchanged at 3.6%, the government said Friday, and remained just a tick above the pre-pandemic low.

The size of the labor force grew by 330,000 in May, nudging the so-called participation rate up to 62.3% from 62.2%. The share of the working-age population who either have jobs or are looking for one is still below pre-pandemic levels, however.

In premarket trades, stocks were little changed after the jobs report.

Wall Street investors and the Federal Reserve were on full alert before the May jobs report. Investors are looking for clues the economy is beginning to soften as the Fed moves to sharply raise interest rates to curb the highest inflation in 40 years.

The Fed, for its part, would like the red-hot labor market to cool off a bit to prevent further upward pressure on inflation. Wages have soared in the past year and are now adding significantly to the cost of doing business.

The increase in worker pay over the past year slowed to 5.2% from 5.5%. While wages have risen at the fastest pace since the early 1980s, the gains appear to be tapering off.

Even with bigger paychecks, workers still can’t keep up with the cost of living.

Inflation has climbed 8.3% over the past year, and while it’s expected to slow, Americans can’t expect much relief in the near future.

Big picture: Wall Street wants a Goldilocks kind of labor market: Not too hot, but not too cool.

The longer the labor market sizzles, the higher wages could go as businesses scramble for workers. That could worsen inflation and lead to a dreaded wage-price spiral, which the U.S. hasn’t seen since the 1970s.

Yet if the jobs market cooled off too much, it could dampen consumer spending and add to growing worries about a recession. Economic growth is all but certain to decelerate owing to higher interest rates.

The warm May jobs report is likely to keep the Fed on track to sharply raise interest rates during the summer.

Key details: Restaurants and hotels again led the way in hiring, adding 84,000 jobs. More people are going out to eat, traveling or taking a vacation.

Looking ahead: “The U.S. labor market keeps barreling along. Despite concerns about a slowing economy, employers continue to add jobs at a torrid pace,” said Nick Bunker, director of research at Indeed Hiring Lab. “The labor market will eventually slow down, but for now it’s still humming.”