The North American Monsoon brought big drought improvements to the Southwest this week, especially New Mexico. However, flash drought is impacting parts of the Midwest, South, and Southeast—where abnormal dryness (D0) is widespread, with pockets of drought. Alaska has also been warm and dry, with huge wildfires. As of June 28, 2022, 42.53% of the U.S. and 47.73% of the lower 48 states are in drought. 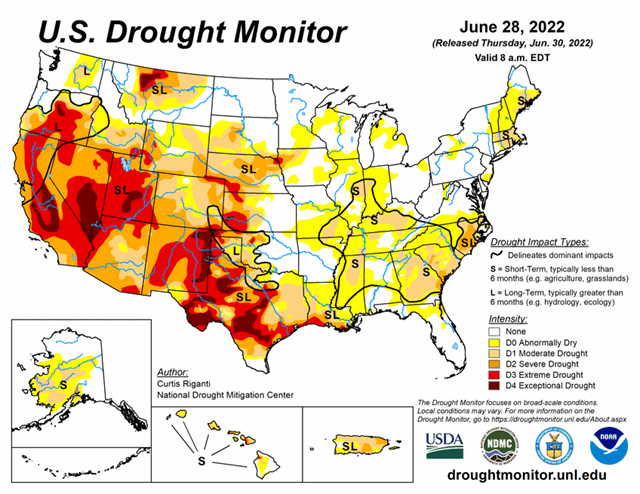 Widespread moderate drought and abnormal dryness continued to form and expand across a large swath of the eastern U.S. this week, with a few areas of severe drought forming or expanding as well. Spotty rain and storms occurred across the East, but in areas that missed out on heavy rainfall, high temperatures, browning lawns, and curling corn signaled that rapid drying was taking place in many areas. An early start to the North American Monsoon, particularly in New Mexico and southern Colorado, led to widespread improvement of extreme and exceptional drought in those states. Extreme drought formed or expanded in parts of the central Great Plains this week, where warm, dry weather continued. Moderate short-term drought also began to expand in parts of New England this week. Short-term moderate and severe drought expanded in coverage in Alaska and Puerto Rico, and drought conditions continued to expand in parts of Hawaii. Finally, despite some improvements to conditions in parts of the West, severe, extreme, and some exceptional drought remains widespread there.

Through the evening of Monday, July 4, the National Weather Service Weather Prediction Center is forecasting dry weather across roughly the western two-thirds of Texas, much of Oklahoma, and most of the Intermountain West. Some precipitation is forecast across parts of Colorado and the Lower Missouri River Valley. Along the Gulf Coast, widespread precipitation is forecast to occur, with the heaviest amounts centered over parts of the Texas coast, where a tropical disturbance will approach. Heavy rainfall is also possible in coastal portions of Georgia and South Carolina. Elsewhere, pockets of moderate to heavy precipitation may fall across parts of the Southeast, mainly in the southern Appalachians or closer to the coasts.