This week brought two big developments: The Southwest Monsoon is coming on strong, and extreme heat and dryness have flash drought alarms going off in Midwest and South. In addition, drought coverage increased in the U.S. after 14 straight weeks of declines, according to the latest U.S. Drought Monitor. As of June 21, 2022, 39.84% of the U.S. and 45.38% of the lower 48 states are in drought. 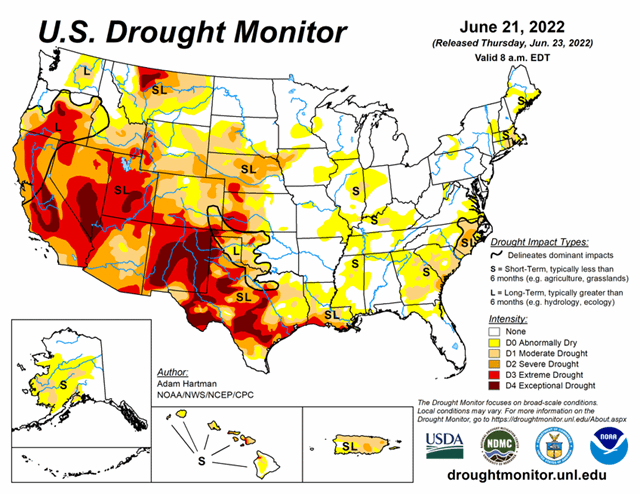 Much above-normal temperatures plagued much of the central and eastern contiguous U.S. (CONUS) this week from the Great Plains eastward to the Mississippi Valley and Southeast. The western third of CONUS, the Northeast, and coastal Mid-Atlantic experienced seasonal to below-normal temperatures. Precipitation was lacking in many locations that experienced excessive (in some cases record) heat, leading to widespread expansion of abnormal dryness and moderate drought conditions along the Mississippi and Ohio Valleys, the Southern Plains, and the Southeast. From the Central Plains northward, despite the excessive heat (daytime high temperatures above 100°F several days this week), recent improvements driven by an active storm track leading up to this week resulted in modest, more targeted degradations in the drought depiction. Another week of heavy rainfall warranted improvements in Montana. In the Pacific Northwest, below-normal temperatures and recent improvements from an active weather pattern leading up to this week resulted in improvements in some of the long-term drought indicators. Heavy rainfall associated with the Southwest Monsoon also fell across parts of the Four Corners region. However, this only acted to halt any further degradations this week. Given drought is strongly entrenched in the Four Corners, an active Southwest Monsoon circulation will need to persist for conditions to improve.

A storm system near the coast of the Carolinas will bring chances for heavy rainfall to parts of the Eastern Seaboard over the next couple of days (June 23-24). Meanwhile, another storm system will intensify and move eastward from the Northern Plains to the Great Lakes. The trailing frontal boundary associated with this system will bring increased chances of rainfall to much of the eastern U.S. However, rainfall is likely to be hit-or-miss and remain below-normal for many locations, especially along the Lower and Middle Mississippi Valley. The passage of the frontal boundary in the eastern U.S. should bring more seasonal daytime temperatures by the start of the work week (Monday, June 27). An active Southwest Monsoon circulation is forecast to bring increased precipitation and below-normal maximum temperatures to parts of the Four Corners region, with below-normal maximum temperatures extending into the Central Plains.

The Climate Prediction Center’s 6-10 day outlook (valid June 28 to July 2, 2022) favors above-normal temperatures across much of California, the Great Basin, and Eastern Rockies. Above-normal temperature probabilities also extend from the Central and Southern Plains eastward to the Appalachians and southward to the Gulf Coast. Near to below-normal temperatures are favored across the Northern Tier of the contiguous U.S. (CONUS), as mean mid-level high pressure is expected to remain farther to the south. Below-normal temperatures and above-normal precipitation are favored for much of the Four Corners region, associated with a robust Southwest Monsoon circulation. Near to above-normal precipitation probabilities also extend along the Northern Tier from the Pacific Northwest to the Great Lakes, associated with storm activity. Increased chances of below-normal precipitation across the northern Great Basin and from the Middle Mississippi Valley to the Northeast are associated with dry northerly mean surface flow and surface high pressure, respectively.