Drought coverage declined in the U.S. for the 13th straight week, according to the U.S. Drought Monitor. Wet and cool conditions from the Northwest to the Northern Plains led to more drought improvements there. However, this week also brought more extreme heat and dryness in the Southwest and Texas. As of June 14, 2022, 39.2% of the U.S. and 44.5% of the lower 48 states are in drought. 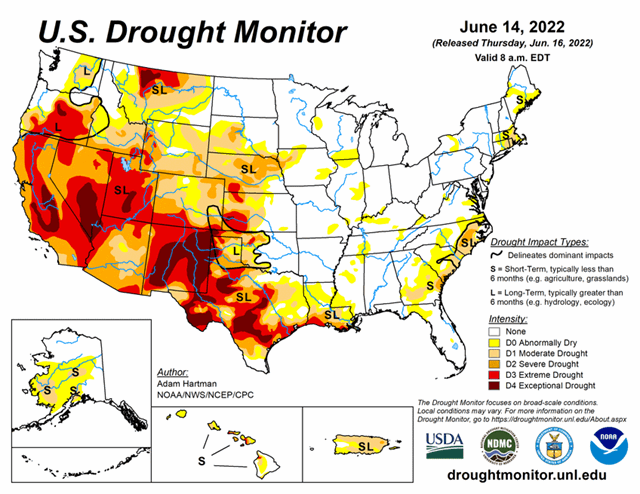 The storm track remained active across much of the contiguous U.S. (CONUS) this week. Much of the Northern Tier states experienced beneficial rainfall and near to below-normal temperatures, predominantly leading to drought improvements from the Pacific Northwest to the Northern Plains. Storm systems and clusters of thunderstorms also resulted in some improvements from the Mississippi Valley to the East Coast. However, where the heaviest rains did not fall, there was some deterioration and slight expansion of abnormal dryness or drought conditions, particularly in parts of the Southeast and Ohio and Tennessee Valleys. Above-normal temperatures and below-normal precipitation was the main story across much of the southwestern CONUS, extending into Texas, leading to general persistence and degradation of drought conditions. Weak trade winds in Hawaii and below-normal precipitation in Alaska have continued, resulting in degradations this week. Warm and dry conditions also contributed to worsening conditions in Puerto Rico.

A storm system with a trailing frontal boundary will exit the northeastern contiguous U.S. (CONUS) over the next 2 days (June 16-17), bringing below-normal temperatures and chances for precipitation to parts of the Great Lakes and Northeast. High pressure is forecast to build over the central CONUS and spread eastward through Tuesday, June 21. Maximum temperatures across parts of the north-central CONUS may reach 15°F to 20°F above-normal. The northwestern CONUS is expected to remain active, as another storm system is forecast to push onshore into the Pacific Northwest and into the Intermountain West during the weekend and leading up to the Tuesday cutoff. With it will come increased chances for precipitation in areas that experienced improvements in recent weeks. Below-normal temperatures are also forecast across much of the western third of the CONUS, in the wake of this passing system.