Biden’s pitch to farmers is 'All Hat & No Cattle' 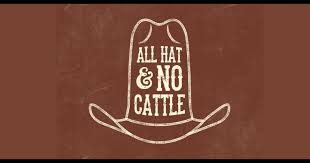 President Dwight D. Eisenhower accurately said, “Farming looks mighty easy when your plow is a pencil and you’re a thousand miles from the cornfield.”

Last week President Biden put down his executive order signing pen and visited Kankakee, Illinois, to speak to America’s farmers about the myriad challenges they face due to inflation, energy prices, supply chains and the conflict in Ukraine. He called on farmers to fill the gaps in the world’s food supply — just as he’s called on the U.S. oil and gas industry to address soaring energy prices. Meanwhile, in the midst of our nation’s recent baby formula shortage, farmers are left to grapple with more regulatory gridlock from the FDA. Once again, rather than correcting the administration’s policies that have increased the problems, Mr. Biden shoveled out blame and excuses that have come to define his presidency.

I grew up just 100 miles away from where Mr. Biden spoke in Stanford, Illinois — the daughter of a proud third-generation farmer. My parents taught me the value of a hard day’s work on our corn and soybean farm — in all kinds of weather and regardless of the economic cycle. I raised cattle and showed them at our local county fair. From the fields and later in the boardroom, I saw the challenges farmers face as they pour their blood, sweat and tears into feeding America every day of the week.

The equipment these farmers rely on uses diesel fuel, which has hit all-time high prices thanks to the administration’s war on American energy — making the very growth Mr. Biden is encouraging all but impossible. The countless measures he took from his first day in office to reduce domestic energy production, drive the price increases that continue today. From canceling the Keystone Pipeline to halting oil and gas leases on public lands and increasing taxes and red tape, Mr. Biden made limiting energy production a priority, and America is paying the price.

At the same time, new climate rules would impact America’s agriculture industry even further. The “Enhancement and Standardization of Climate-Related Disclosures for Investors” requires extensive disclosures by public companies of measured impacts on their entire supply chain. The Farm Bureau suggests this could create substantial costs and liabilities for farms and could have “meaningful consequences for farmers’ and ranchers’ ability to produce food, fuel, and fiber for the U.S. and the globe and puts in jeopardy the security and stability of the U.S. supply chain.”

On top of that, the Biden EPA has reinstated the ever-burdensome Waters of the United States rule, which would also have a significant economic impact on farms, ranches and other family businesses.

Mr. Biden’s speech last week made clear he doesn’t understand the plight of our farmers. While they work out of the media’s line of sight, our country is deeply dependent on the survival of the farmer. About 2% of our country’s population are farmers, but 100% of our population eats — and our strength as a nation comes from our role in helping feed, clothe and fuel the world.

While the president spoke of the need for American farmers to make up for the lost production in Ukraine, offering more insurance for double cropping, and funding to increase the production of domestic fertilizer, these half measures ignore the key challenges American farmers face as a result of the Biden Administration’s anti-energy platform.

Mr. Biden was right to address concerns about the rising costs of fertilizer — the Senate Agricultural Committee released a report showing that the cost of fertilizer is up 220% from January 2021. But just two weeks ago, Mr. Biden’s own USAID Director said she hoped the fertilizer shortage would “hasten the transition” to compost and manure, using the phrase “never let a crisis go to waste.” The fact is that while the Russian invasion of Ukraine further jeopardized fertilizer for U.S. farmers, the shortage has been an ongoing issue — one that should not be used as a vehicle for the green energy agenda.

What American farmers desperately need is certainty — certainty that the regulatory agenda won’t be driven by the whims of the far left. The president should immediately ease the regulatory expansion on farmers — who already operate under dozens of environmental requirements. They should end their war on American energy, with an emphasis on restarting pipelines, opening oil and gas leases and permits on federal lands, and reducing the taxes and red tape that will lower energy costs and reduce costs on America’s agriculture industry.

The Biden administration could benefit from the words of Thomas Jefferson, who once said that “agriculture … is our wisest pursuit because it will, in the end, contribute most to real wealth, good morals and happiness.” Indeed, America’s health, strength, independence and future very much depend on it.

Kelly Loeffler is the chair of Greater Georgia and a former U.S. senator for Georgia.