A stormy week across the U.S. led to improvements for large swaths of the Northwest, northern Rockies, and Plains. However, dry and windy conditions continue in the Southwest into western Texas. As of May 3, 2022, 45.01% of the U.S. and 53.77% of the lower 48 states are in drought. 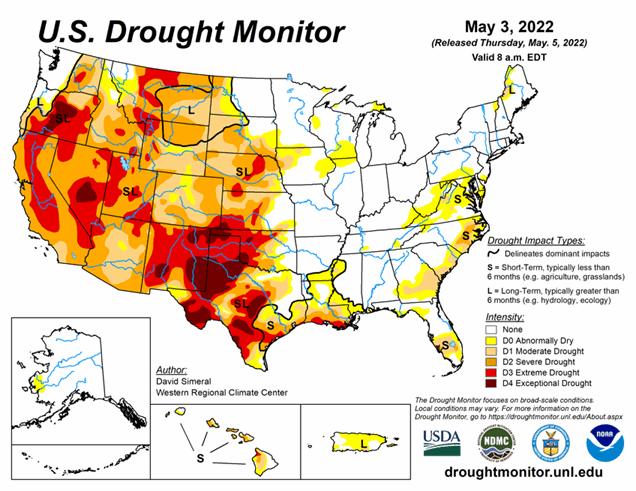 This U.S. Drought Monitor (USDM) week was marked by ongoing active weather across areas of the conterminous U.S. including the Pacific Northwest, Northern Rockies, Plains, Lower Midwest, and isolated areas of the South and Southeast. The most severe weather was observed across the Central Plains and areas of the Midwest where numerous tornadoes touched down in areas including eastern Kansas, southeastern Nebraska, and northern Illinois. Widespread heavy rainfall accumulations were also observed, ranging from 2 to 7 inches, with the heaviest accumulations in eastern Nebraska. The rainfall events provided much-needed moisture to the region-boosting soil moisture levels across parched areas from Kansas to South Dakota. In the West, fast-moving storm systems delivered late season high-elevation snowfall to the Cascades of northern Oregon and Washington, the Northern and Central Rockies, and areas of the northern Great Basin. The highest snowfall totals (8 to 12+ inches) were observed in the Salmon River Mountains of Idaho, the Ruby Mountains of northeastern Nevada, and the Wind River Range of Wyoming. In California and the Southwest, conditions were dry during the past week with strong winds observed across the region.

The windy, dry conditions exacerbated fire-weather conditions in Arizona and New Mexico where several large early-season wildfires are currently impacting the region. In northern New Mexico, the Hermits Peak Fire, situated east of Santa Fe in the Sangre de Cristo Mountains, has burned 147,909 acres and is only 20% contained (May 4), according to the National Interagency Coordination Center. On the water-resource front, the Colorado River Basin water situation continues to deteriorate due to the long-term impacts of drought with water levels at Lake Powell and Lake Mead currently at 24% full and 31% full, respectively. With Lake Powell’s water surface elevation currently at 3,522 feet, it is quickly approaching the 3,490-foot threshold level at which Glen Canyon Dam can continue to generate hydropower. The U.S. Bureau of Reclamation (USBR) announced (May 3) two urgent drought response actions to help bolster water levels at Lake Powell. The plan includes additional upstream releases from the Flaming Gorge Reservoir (~500,000 acre-feet [kaf] of water) as well as reducing Glen Canyon Dam’s annual release volume from 7.48-million acre-feet to 7 million acre-feet. In terms of this week’s map, short-term precipitation led to targeted improvements in the Pacific Northwest, Central Plains, South, and the Southeast, while degradations were registered in the Southwest, Texas, Southeast, and the Mid-Atlantic.

The NWS WPC 7-Day Quantitative Precipitation Forecast (QPF) calls for moderate-to-heavy liquid (liquid = rain + SWE) precipitation accumulations ranging from 2 to 5+ inches across eastern portions of the Central and Southern Plains and the Lower Mississippi Valley. In the Lower Midwest and the Mid-Atlantic, precipitation totals are expected to range from 1 to 3 inches. Out West, accumulations ranging from 1 to 5 inches are forecasted for the coastal ranges and the Cascades of western Oregon and Washington. Further inland, lighter accumulations (< 2 inches) are expected in the Northern Rockies of Idaho, Montana, and Wyoming. Further south, conditions are expected to be dry across California, the Great Basin, and the Desert Southwest.

The CPC 6-10-day Outlooks calls for a moderate-to-high probability of above-normal temperatures across the eastern two-thirds of the conterminous U.S. with exception of some coastal areas of the Mid-Atlantic and Florida. Below-normal temperatures are expected across much of the West with exception of eastern portions of Colorado and New Mexico where there is a low-to-moderate probability of above-normal temperatures. In terms of precipitation, the wetter-than-normal pattern is expected to persist across the northern tier of the West as well as in areas of the Great Plains. In coastal areas of the Far West, near-normal precipitation is expected. Across much of the eastern half of the conterminous U.S., including areas of the Southern Plains, Lower Midwest, Mid-Atlantic, and the Northeast, there is a moderate-to-high probability of below-normal precipitation.