The Southwest and western parts of the Central and Southern Plains have been dry and windy (with extreme heat in Texas). Together, you get a major expansion of Extreme (D3)/Exceptional (D4) Drought in these regions. As of May 17, 2022, 43.98% of the U.S. and 52.54% of the lower 48 states are in drought. 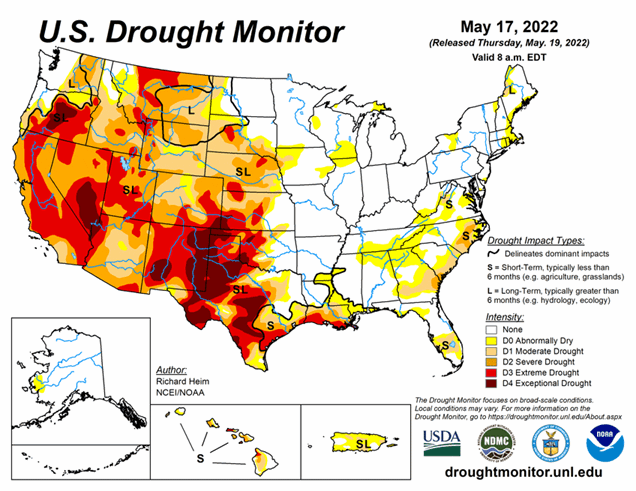 In the upper levels of the atmosphere, a strong ridge of high pressure dominated the contiguous U.S. (CONUS), from the southern Plains to Northeast, at the beginning of this U.S. Drought Monitor (USDM) week, while an upper-level trough dominated the West. The trough moved east as the week progressed, dragging a surface low pressure system and cold fronts across the northern Plains to Great Lakes, while another upper-level low moved over the Southeast and weakened. Weekly temperatures averaged much warmer than normal beneath the ridge and cooler than normal in the West beneath the trough. The fronts, lows, and upper-level troughs brought above-normal precipitation to parts of the Pacific Northwest, northern Plains to western Great Lakes, and spotty areas in the South, New England, and along the Atlantic Coast.

The week was drier than normal across the rest of the CONUS. The continued lack of precipitation further dried soils, lowered stream levels, and stressed crops and other vegetation, while the excessively warm temperatures increased evapotranspiration and added to the stress. Drought or abnormal dryness contracted where precipitation was above normal, especially in the Northwest, northern Plains, and Mid-Atlantic. Drought or abnormal dryness expanded or intensified where it continued dry, especially in the Southwest, southern to central Plains, Southeast, and parts of the Northeast.

The upper-level circulation will continue to bring Pacific weather systems across the CONUS during the next USDM week. Temperatures are forecast to be below normal from the Pacific Northwest to Great Lakes and southward into the central Plains. An eastern ridge will keep temperatures warmer than normal along the East Coast. An inch or more of precipitation is predicted to fall through Tuesday morning for some of the mountains of the Pacific Northwest and central to northern Rockies. An inch or more is expected from the southern Plains to Great Lakes and eastward to the East Coast, but some areas along the East Coast will have less than an inch and some areas from the Lower Mississippi Valley to Ohio Valley, as well as much of Florida, can expect 2 or more inches. Most of the Great Plains will see less than half of an inch of rain. Much of the Southwest, from California to New Mexico and including parts of the Pacific Northwest, will receive little to no precipitation.

For the period May 24-28, odds favor above-normal temperatures for the Southwest, Deep South, East Coast, and southwest Alaska, and below-normal temperatures in Washington, the Upper Mississippi Valley, and eastern Alaska. Odds favor below-normal precipitation from California to the western portions of the central and southern Plains, as well as western Alaska, while above-normal precipitation is likely in Washington, east-central Alaska, eastern portions of the southern Plains, and from the Mississippi Valley to East Coast.