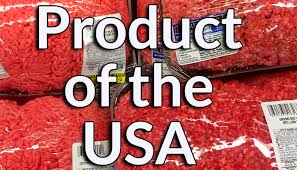 Domestic manufacturers were promised an aggressive buy American agenda. The beef and pork producers were among the most hopeful. These domestic producers are the ONLY ones who are prohibited from specifically labeling their products.

The “big 4” meat packers have a choke hold on the industry. They control about 85% of the meat packed in the USA. This is a demonstrated food security issue. They have been driving up retail prices while choking domestic producers for decades.

With much fanfare, the Biden Administration entered the fray. They would facilitate the proliferation of medium and small meatpacking plants. It seemed like the solution. Well, stand-alone meatpacking cannot turn out a volume of product needed to be effective competition without being part of a complete supply system. A complete system consists of livestock producers, feeding/finishing operators and retail marketing outlets. Thus, there will be billions spent with little chance of producing effective competition.

Enter Congress. Recently the House and Senate Agricultural committees held hearings on the “problem.” Caveat, invited for testimony was one lone producer and testimony from the organization that has openly opposed labeling domestic beef and pork while promoting deceptive labeling. This organization, the National Cattlemen’s Beef Association, also is the principal recipient of Beef Checkoff funds. A recent sample audit found gross misappropriation of checkoff funds. There was NO meaningful action taken by the USDA.

Is this all just election year theater? There was the OFF act in the 116th Congress (Opportunity for Fairness in Farming). This bill would have instituted the investigation of all commodity checkoff programs, but was vehemently opposed by the NCBA. The NCBA claims 33,000 members, this is less than 5% of the remaining producers. Therefore, they do NOT represent the “majority” of the producers. The 117th Congress now has an OFF act (Off Fossil Fuels Act). Coincidence or subterfuge?

Meanwhile back at the ranch. With the present cacophony of empty election year theater where is the domestic beef industry?

Investigation of the Beef Checkoff program is needed at this time because the referendum promised when the checkoff began never happened.

It should be clear that a “cattle” trade association (NCBA) that disagrees with the OFF Act does NOT represent cattle producers!

The beef checkoff is a $1 per head sold assessment paid by those selling cattle. Note, selling live cattle is not the same business as selling beef!

Producers mostly sell at cattle auction markets. Backgrounders and feed lots are the principal purchasers. The purchasers need to purchase our feeders at the best price they can get. We producers need the highest price we can get. Competition for our feeders should make for a fair market for all. In the past 25 years, 82,964 feedlots have gone out of business. Most of these were small- to medium-sized, family-owned operations. This loss decreased competition for producers’ cattle. This caused downward pressure on prices received by producers. However, the consumers are paying record high prices at the supermarkets.

The “beef industry” begins with the meatpackers and culminates with the retail outlets. Some meat packers have been allowed to own feedlots in violation of the Packers and Stockyards Act. This ownership allows the packers to manipulate the cash market and depress the prices received by independent feeders. The price depression and decreased competition at the auction houses, are reflected in the lower prices received by the producers.

The checkoff dollar has been used by subterfuge to support lobbying by the NCBA which opposes the mandatory Country of Origin Labeling of beef and pork products.

Meatpackers and retail outlets don’t pay the checkoff fee. Have you ever seen a television commercial for live cattle? Why not?

The purpose was to increase per capita beef consumption in the USA. Theoretically, this would increase cattle sales and improve the lot for our domestic producers and the entire chain, in addition to stabilizing prices to the consumer.

Let’s look at the results.

People are eating less beef per person. However, the domestic beef production is 20-30% less than the total amount of beef consumed. This reflects the growth in the population of the United States of America. The gap is filled with imported beef. Thus, the emphasis on beef exports as an indicator of market health is misleading if not downright dishonest. Based on domestic production, beef exported as product of the USA can’t be all domestically produced. Some, if not most, of this export is beef imported and repackaged as product of the USA.

The NCBA uses checkoff dollars to lobby against Country of Origin Labeling of all beef products. This is despite the history of one of the “Big Four” meatpackers, exporting contaminated beef from their home country. It is well known in business circles that branding is a cornerstone of marketing. Like FORD, GMC, Tesla and Mercedes.

It has been stated by some that the checkoff is working as intended. If that’s true, then it was intended to drive the domestic producer out of business. Clearly, we were misled from the inception of the beef checkoff program. If it were simply terminated, it would save the family cattle producer.

Data above is taken from USDA Economic Research Service and/or USDA National Agricultural Statistics Service reports, and therefore, is available to Congress and the Biden Administration.

The solutions are simple:

Congress should 1) pass mandatory Country of Origin Labeling, 2) make the Beef Checkoff voluntary, and 3) Enforce the Packers and Stockyards Act.

These three measures would stop the USA hemorrhaging domestic producers. That done, concentration can be dealt with in due course.