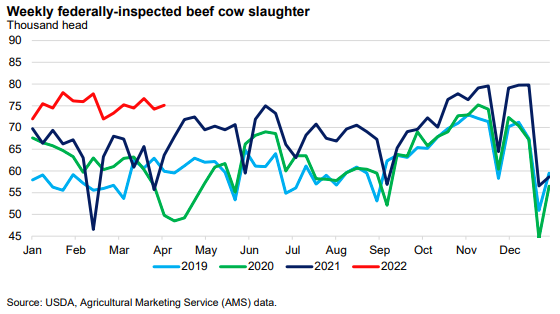 Cow and Bull Slaughter in First-Quarter 2022 at Highest Level in Decades In the first quarter of 2022, federally-inspected (FI) nonfed1 cattle slaughter reached volumes not seen since the mid-1980’s, based on USDA, Agricultural Marketing Service (AMS) estimated and actual weekly slaughter data through the week ending April 2, 2022.

During this period, weekly FI nonfed cattle slaughter averaged more than 8 percent above year-ago levels. Specifically, through the first 12 weeks, 2 weekly FI slaughter of beef cows and bulls averaged 18 and 15 percent, respectively, above last year, while dairy cow slaughter declined 3 percent. As the chart below shows, beef cow slaughter has outpaced year-ago levels. Typically, cow slaughter would display this volume in the fourth quarter. However, higher feed costs, drought conditions plaguing much of the nation, and historically high prices for cull cows have cow-calf producers making further cuts to their herds. The macroeconomic situation has also changed from last year with higher fuel prices, feed costs, and operating costs that may be affecting producer decisions as well.

Although the price for other hay is relatively unchanged from January to February, prices are up 5 percent from a year ago (February 2021) with States reporting increases of 3 to 80 percent above last year. The Northern Plains and the Northwest are displaying the greatest increases in hay prices from last year.

At the beginning of 2022, the beef cow herd had undergone its third straight year of contraction and the fifth consecutive year of fewer beef replacement heifers reported. To the extent the availability of cows for slaughter remains low and demand for beef is relatively strong, 90- percent lean trimmings for processing are expected to be elevated. Trimmings prices have maintained historically high since July 2021. Beyond a brief period in May 2020, prices thus far in 2022 have not been this high since 2015.

Based on the economic and environmental factors noted, expectations for cow and bull slaughter were raised in each quarter of 2022. Despite the highest cow slaughter volume typically occurring at the end of the year, the volume in fourth-quarter 2022 will likely not surpass the first quarter. The 2022 price forecast for live cutter cows3 was raised to $79 per hundredweight (cwt). This is 22 percent above the 2021 average of $64.91 per cwt and the highest price since 2015.

Beef production in the first quarter of 2022 was raised slightly on the latest actual and estimated FI slaughter through March. Since last month’s report, USDA, AMS actual and estimated slaughter data reflected fewer fed cattle4 and more nonfed cattle in the slaughter mix than expected. Despite this change in slaughter proportions, steer and heifer carcass weights since mid-February averaged about 16 and 14 pounds heavier than in the same weeks last year. As a result, expected average carcass weights were raised for the first quarter.

Beef production in the third quarter was also raised based on higher expected nonfed cattle slaughter, along with more marketings from larger-than-anticipated cattle placements in the first quarter. According to the most recent USDA, National Agricultural Statistics Service (NASS) Cattle on Feed report, the number of cattle placed in feedlots with 1,000 or more head capacity in February was up more than 9 percent from last year. Placements outpaced marketings of cattle for slaughter, keeping feedlot inventories elevated, with the March 1 inventory being the largest since the series began in 1996. Although inventories are at historic levels, supplies of market-ready cattle are not as large as they were last year.

March prices for fed steers in the 5-area marketing region averaged $139.17 per cwt, almost $25 above March 2021 prices, bringing the first-quarter average to $139.25 per cwt. In early second quarter, fed cattle prices were generally steady-to-lower at about $139 per cwt. Although market-ready cattle supplies on March 1 are below a year ago, they are above the average volume for this time of year. Further, because marketings in the first quarter were reduced, anticipated fed cattle marketings in the second and third quarters were raised. As a result, those quarters will likely remain under pressure, reflecting seasonally-increasing supplies of market-ready cattle in feedlots at heavier than year-ago weights. Further reflecting the temporal shifts in fed cattle marketings, fed cattle prices in the fourth quarter were raised $1 to $143 per cwt for an unchanged annual forecast of $139.50 per cwt.

The March price for 750–800-pound feeder steers sold at the Oklahoma City National Stockyards was $153.09 per cwt, about $16, or 12 percent, above last year. With higher placements in the first quarter, it is likely that calves that might have remained on pastures later in the year were pulled forward. As a result, from last month, tighter anticipated feeder cattle supplies in second-half 2022 will likely support elevated prices. The third- and fourth-quarter prices were raised $4 and $6, respectively, to $165 and $172 per cwt. The 2022 price forecast for feeder steers is $163 per cwt, an 11-percent increase from 2021 prices.