The Return of COOL? Legislation Would Resurrect Origin Labeling for Meat 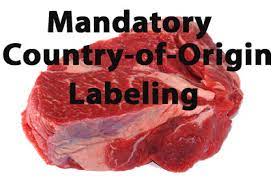 Mandatory country of origin labeling (COOL) is back on the table with the American Beef Labeling Act, which would reinstate COOL for beef after its repeal in 2015. If passed, rancher advocates say profits of independent cattle producers could increase as consumers choose to buy U.S.-produced meat to support the nation’s rural communities.

“Consumers understand the need to strengthen the economic foundation of rural America and they know that they can achieve that through their purchasing choices,” said Bill Bullard, CEO of R-CALF USA, a legal fund for ranchers and cattlemen.

In 2013 USDA tightened its regulation of meat labeling to require sellers to provide consumers with more detailed information about the meat’s origins, including the country in which the animal was born, raised, and slaughtered.

At the same time the revised regulations went into effect, cattle prices and retail beef prices began to increase, according to Bullard.

“Throughout 2013 and 2014, beef and cattle prices rose to the highest nominal levels in history, and cattle producers were finally recovering a profit from the marketplace itself,” Bullard said.

Advocates point to these profit increases as evidence of consumer behavior influencing the domestic meat market because of COOL. 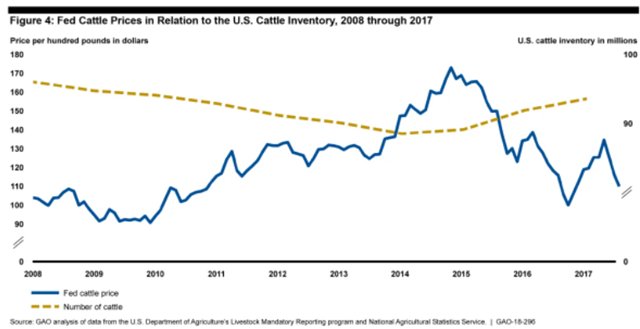 Advocates of better country of origin labeling point to higher cattle prices (blue line) from 2013 to 2015 as evidence of the regulation’s effectiveness. Ag economist Jayson Lusk of Purdue University said the higher prices correspond with a drop in cattle inventory (brown dashed line). (Source: 2018 report to members of Congress from the General Accounting Office)

Alan Shammel, a rancher who raises calves near Lewiston, Montana, and member of the Northern Plains Resource Council, saw a considerable increase in profit during this time. When COOL was instated, Shammel got approximately $1 more per pound for his calves, which weigh in at about 700 pounds when they’re sold to feedlots in the Midwest. Shammel sells between 300 and 350 calves each year, so this was an annual increase of $210,000 for his business.

“We buy all our inputs locally, so that money stays in the area,” Shammel said. The inputs, or supplies and infrastructure farmers use to raise cattle, include minerals and feed, new machinery, and ranch updates.

Just two years after the 2013 regulations were enforced, a World Trade Organization (WTO) compliance panel ruled that COOL hampered competition livestock from Mexico and Canada. “Corporate meatpackers were able to convince Canada and Mexico to file a claim to the WTO saying that country of origin labeling was an illegal trade barrier,” said Tim Gibbons, communication director for Missouri Rural Crisis Center.

The WTO authorized $1 billion in retaliatory tariffs from Mexico and Canada against the U.S. because of COOL, jump starting Congress’ repeal the requirement.

In late 2015, most of COOL’s provisions were revoked for both muscle-cut and ground beef and pork. Now, any meat that is born, raised, and slaughtered outside the U.S. can be labeled “Product of the USA” as long as the product was packaged within the United States. Critics of “Product of the USA” labeling say it misleads consumers and undercuts the profits of independent producers in the U.S. during a time of low cattle prices.

One agricultural economist isn’t convinced the repeal of COOL caused the drop in cattle prices seen after 2015.

“Was it correlation or causation?” said Jayson Lusk, a professor at Purdue University. “I tend to be on the side that even though COOL was repealed at about the same time there was a drop in cattle prices and loss of profitability, to my mind it wasn’t really associated with COOL.”

According to Lusk, COOL was enacted when cattle supply was low. “People were reducing herd sizes because of a lot of stuff that had gone on a few years earlier like droughts in the West and the ethanol market and corn prices,” Lusk said. “This really drove [cattle] prices up in 2014 and 2015.”

For cattle ranchers like Shammel, the loss of income after 2015 came as a significant blow.

“It was a loss to the entire community when our ranch lost that extra money. And when you multiply that by all the other ranchers in the area, it’s just tremendous,” he said.

Now, Shammel’s beef is indistinguishable from imported beef in the grocery store because of the less strict requirements for “Product of the USA” labeling.

The House bill, introduced in late March of 2022, is co-sponsored by U.S. Representatives Lance Gooden (R-Texas) and Ro Khanna (D-California).

The American Beef Labeling Act comes in the wake of new strides by the Biden administration’s announcement that it will  enforce antitrust laws and fight corporate consolidation. In July of 2021, President Biden signed an executive order promoting competition in the American economy, including the agriculture sector, where just a few corporations control large portions of ag-related markets.

“The ability of these multinational meatpackers to import meat and beef from all around the world and undercut prices paid to U.S. independent family cattle farmers is one of the reasons they’re able to take advantage of their market control, increase profits and not pay producers,” said Gibbons with the Missouri Rural Crisis Center. If consumers have more information about where their food comes from, rancher advocates say this could help shift the beef market into the hands of independent producers.

Advocacy groups like Western Organization of Resource Councils are working to get the bill more co-sponsors, including Senator Steve Daines (R-Montana) and Senator Kevin Cramer (R-North Dakota). Neither has signed on yet.

“There remain differences in stakeholder opinions on the legislation, but we all want to find lasting solutions to keep American ranchers and farmers in business,” said Senator Cramer in an email to The Daily Yonder. “We must push for solutions which allow American producers to differentiate their higher quality product while not triggering billions in retaliatory tariffs with our largest trading partners.”

Skeptics of COOL have cited concerns that the WTO would have similar opposition to the bill as in 2015. The American Beef Labeling Act addresses this concern by stating that the “United States Trade Representative, in consultation with the Secretary of Agriculture, shall determine a means of reinstating mandatory country of origin labeling for beef…that is in compliance with all applicable rules of the World Trade Organization.”

Cattle rancher and Colorado Department of Agriculture commission member Kathryn Bedell isn’t worried about retaliation from the WTO if COOL were reinstated. “I think we’re more prepared to take on the WTO than we were [in 2015],” Bedell said. “We’re seven years down the road and there’s different people there and different things that have happened around the world.”

Kathryn Bedell says current profit margins are so low that ranchers can’t afford to make beneficial changes in how they raise livestock.

Bedell raises grass-fed beef outside of De Beque, Colorado. She is the sole owner of her cattle, handling them throughout the entire process – from birth to slaughter to sale to the consumer. Bedell is also a staunch advocate for regenerative agriculture and responsible land stewardship.

“Here in the Grand Valley, methods like no-till and cover cropping are really starting to take off,” Bedell said. “Conventional grain farming for cattle works, but it actually works better to put livestock on the land because then you’re recycling nutrients.” Recycling nutrients means ranchers buy less fertilizer as cows put nutrients back on the field through their manure.

“You’re cutting down on your inputs like pesticides, which makes the world healthier,” Bedell said.

These values have influenced Bedell’s support of COOL, which advocates believe could increase ranchers’ profits if reinstated. “If you can allow cattlemen to make more money, they can afford to do a better job and change what they’re doing,” Bedell said. “Right now, the profit margins are so low that we have no money to change the way we’re doing business.”

The number of independent cattle producers has been decreasing as these profit margins get smaller, but it’s difficult to track exactly how many independent producers are entering or leaving the business, according to rancher advocates. The U.S. Department of Agriculture (USDA) no longer publishes annual cattle producer data, so the only way to track these numbers is with the USDA’s agriculture census, published every five years.

“We are definitely in a serious crisis right now as an industry,” R-CALF’s Bullard said. “Competition has been purged throughout the live cattle and beef supply chains. Country of origin labeling would empower consumers to reignite competitive market forces in the entire beef supply chain because consumer buying preferences would initiate demand signals upstream.”

If the legislation passes, beef producers would have one year to implement COOL. No timeline has been released for when the House and Senate bills will be voted on.