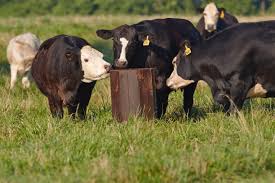 The major nutritional requirements are: water, energy, protein, minerals, and vitamins. In many cases, beef producers do a good job of providing adequate water, energy, and protein.

However, many beef producers buy ‘cheap’ minerals, ignoring the fact that the availability of the minerals in the oxide form in many of these mixes are only 10 to 20% as absorbable by the animal in the sulfate, chloride, organic, or chelated forms (when minerals are metals bound to an organic compound such as an amino acid in zinc methionine or organic selenium in selenomethionine; Spears, 2003) in more expensive mineral mixes.

The advantage of more available forms of minerals are seen when stress increases. Consider the fact that weather can be a stress, whether it’s extreme heat or cold, and that working cattle at breeding, vaccination, and weaning can be stressors. So, why do so many producers buy minerals that don’t provide the best nutrition to the animal when they need it most, and buy the cheapest mineral instead? In many cases, it’s because we think in terms of tons rather than days, and a ton of mineral seems expensive relative to a ton of hay, but not when you consider that a ton of mineral with an anticipated intake of 4 oz per day will provide feed for 8,000 animal days.

I can’t imagine a beef producer going to their truck dealership and asking for the truck with the least power when it’s under a load, or asking for the truck with the weakest transmission, but we do this same thing when we buy minerals with the poorest absorption during times of stress, then we buy additional hay, or grain, or treat sick newborn calves, or blame the bull when cows don’t breed in a timely manner.

In beef cattle, macro minerals are described as those required at concentrations greater than 100 ppm of the diet and are often expressed as a percentage of the diet.

Trace minerals are considered to be those required at concentrations less than 100 ppm (McDowell, 1992; NRC, 1996). Macro minerals include calcium, phosphorus, potassium, magnesium, sulfur, and sodium and chloride (salt), whereas the trace minerals include cobalt, copper, iodine, manganese, selenium, iron and zinc (NRC, 1996). The most commonly deficient vitamin is vitamin A, as vitamin D is synthesized by cattle exposed to sunlight or fed sun-cured forages, and vitamin E concentrations are high in fresh forages. Rumen microflora synthesize B- vitamins in sufficient quantities, and B-vitamin supplementation is not normally needed. It is important to remember, however, that the most important nutrient is the one that is missing or deficient, and in the case of nutrient imbalances, there can be more than one!

Magnesium and the trace minerals copper and manganese are all cofactors in the cow’s energy producing metablolic pathways, and deficiencies can limit energy production and utilization at the tissue level. For instance, if a mineral is $1200 per ton, it seems like a lot of money so producers tend to purchase the cheapest mineral possible. However, at a 4 ounce per day intake, the mineral only costs $.15 per day ($1200 ÷ 2000 pounds = $.60 per pound × .25 [4 ounces = ¼ pound] = $.15 per day). The cost of really good mineral nutrition is only $54.75 per animal per year (365 days × $.15 per day)! Well, does that pay?

If a producer supplements their cows with 5 pounds of distillers grains, or corn, for 60 days in late gestation and early lactation in order to keep body condition in the 5.0 to 5.5 range, it would cost $.75 per day for DDG, and $.625 per day for corn. That’s $45.00 for DDG, and $37.50 for corn, and that doesn’t include the cost, and time, involved with transportation and feeding. This doesn’t even take into account the number of calves that are born weak, or the fact that the quality of colostrum is impacted by nutrition, or the fact that supplementing with corn or distillers grains can increase calf birth weight and increase calving difficulties.

Why not feed a mineral mix that improves the entire management of the cow herd, allows the cow to take advantage of improvements in body condition throughout the summer and fall, and improves her ability to deliver a live calf and then rebreed in a timely manner. Producers could reduce energy and protein supplementation costs, reduce the average number of days from calving to rebreeding, reduce the number of calves treated for illness due to poor immunity early in life, and increase the tootal pounds of calves weaned and whole-herd profitability potential, and focus more time on management.