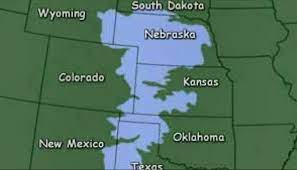 In all, the Ogallala Aquifer provides 70-80% of water used by Kansans each day.

So how much is all that water worth?

But those billions are drying up at an accelerating rate.

Aquifer water levels across western and central Kansas dropped by more than a foot on average this past year. That’s the biggest single-year decrease since 2015, according to the Kansas Geological Survey’s annual report.

And while the aquifer is losing that foot of water, it’s barely being refilled. In most of western Kansas, less than one inch of water seeps underground to recharge the aquifer each year.

But those accelerating depletion rates didn’t come as a surprise to Brownie Wilson, the survey’s water data manager. Western Kansas is a water-challenged place that gets about half as much precipitation as eastern Kansas in an average year.

Then the drought hit.

“For some of those folks, it hasn’t rained since May,” Wilson said. “That makes it really challenging.”

Even the snowfall from recent blizzards couldn’t make up the precipitation deficit. Most of western and central Kansas remains in severe, extreme or exceptional drought.

That puts the people trying to raise a crop there in a tough spot. So farmers turn to pumping more water from below to irrigate their fields and make up for how dry it is on the surface.

Wilson said 80-90% of the water used in the Ogallala aquifer region goes to irrigation. That averages out to about 2.5 billion gallons a day, pumped up and sprayed on crops.

Estimates show that if pumping trends continue, more than two-thirds of the water under Kansas will be gone within 40 years. In some parts of western Kansas, the aquifer has already depleted so much that it’s basically unusable for irrigation.

K-State agricultural economics professor Nathan Hendricks studied data from actual property sale and rental prices — comparing the prices of irrigated and nonirrigated land — to calculate the aquifer’s worth to western Kansas at $3.8 billion.

And if the decline of the aquifer isn’t drastically slowed, Hendricks said, western Kansas land will collectively lose $34 million in value each year by 2050.

That means property values will drop as acres that once had irrigation lose access to water.

Hendricks said the study isn’t intended to tell landowners what to do. But he hopes it can help them make decisions about their water use for the long term.

For both individual farmers and the region as a whole, it’s a complicated question.

He said sometimes it’s easy to forget that shutting down irrigation from the aquifer would gut land values just like depletion would.

Hendricks said he’s already seeing some farmers voluntarily reduce the number of acres they’re irrigating in an effort to prolong their section of the aquifer’s life and expects that trend to continue.

‘Devil’s in the details’ for Kansas farmers

He points to successful voluntary water conservation efforts led by farmers, such as the state’s first Local Enhanced Management Area, or LEMA, in northwest Kansas and a similar program recently approved in west-central Kansas.

“In the next 10, 20, 30 years of our lifetime, the biggest impact we can have is to use less water out of that aquifer,” Wilson said. “People are realizing they can still be economically viable and use less water.”

But understanding the problem, he said, isn’t the hard part.

“The solution to the aquifer is simple: you put more water into it or you quit taking so much out,” Wilson said. “But the solutions to get there, that's the challenging part. That's where the devil’s in the details.”

And thus far, finding consensus on broader statewide solutions has been difficult.

Recent legislation proposed in the Kansas House would have created a new cabinet-level department overseeing the state’s water issues and forced aquifer management districts in western and central Kansas to place stricter limits on water usage to curb the depletion rate.

But those sections of the bill were removed during committee discussions, leaving some legislators frustrated with how the agriculture industry’s influence continues to thwart water conservation measures. It appears unlikely that even a slimmed down version of that bill will be passed this year.

But figuring out some way to slow the aquifer’s depletion, Wilson said, isn’t just a critical issue for western Kansas.

While the aquifer drying up might impact western Kansas farmers most directly, the prosperity or decline of the multibillion-dollar agricultural economy that depends on that water will have ripple effects across the state.

“The declines in the western side of the state aren’t going to suddenly affect water flow in the Kansas River for people in Kansas City,” Wilson said. “But the viability of western Kansas is going to have an impact on the economy of Kansas, and that’s gonna affect everybody.”