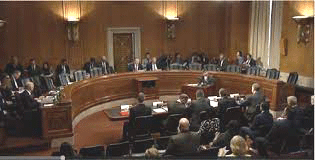 The chief executives of four big meatpacking companies denied conspiring to manipulate beef supplies or prices as they defended themselves in congressional testimony Wednesday against charges of profiteering.

Long-simmering grievances over the meat companies’ dominant market position have boiled over into the broader political debate as rising inflation has become the American public’s top concern and prices at the meat counter a flashpoint. Beef prices were up 16% in March from a year earlier, outpacing the broader 8.5% inflation rate during the period, itself the highest in four decades.

President Joe Biden and some congressional Democrats have targeted the four meatpacking companies as economic villains, arguing they are leveraging their market share to profiteer from the Covid pandemic and supply-chain shortages.

House Agriculture Committee Chairman David Scott, a Georgia Democrat, opened the testimony with a bit of courtroom drama, asking each of the CEOs to raise their right hands and swear to tell the truth, a formality congressional hearings often skip. He then asked each to answer whether their companies had ever made an agreement among themselves to raise beef prices or manipulate supply.

He confronted them with a graph showing the difference between the cost packers pay for cattle and the wholesale prices they receive for beef rapidly rising since 2015.

“When you look at this chart, it explains why questions are being raised,” Scott said. “How can it jettison up?”

Each of the executives answered the question on price manipulation in turn with a simple, “No,” or “Not that I am aware of.”

The denials are significant because companies including Tyson and JBS have been embroiled in chicken and pork price-fixing scandals that have prompted class-action lawsuits and an antitrust investigation into the industry by the Justice Department. The companies have already paid hundreds of millions in fines or settlements.

Tyson Foods Inc. CEO Donnie King said the rise in packers’ margins are partly due to the cycle of cattle markets, as higher prices for cattle in 2014 led to an expansion of herds that then drove down livestock prices.

He added that the surge in consumer beef prices since the pandemic that has captured public attention is driven by nothing more than “straightforward market forces.”

“Tyson does not set the prices for either the cattle we buy or the beef our customers purchase,” King told the panel. “Instead, the prices are determined by supply and demand.”

Tyson Foods reported the profit margin from its beef segment hit 19% in its most recent quarterly results, for the period ended Jan. 1, up from 13% a year earlier. The company said margins would drop to more normal levels later this year.

Production slowdowns and labor shortages during and immediately after the pandemic led to a production backlog of approximately one million cattle, said Tim Klein, CEO of National Beef Packing Co. That “negatively impacted cattle prices in 2020 and for much of 2021 before being cleared,” he said.

A group of ranchers and cattle producers opened the hearing. They included Coy Young, a fourth-generation Missouri cattle farmer who said he’d considered killing himself as he was financially squeezed by falling prices for his livestock.

“The markets are so broken they’re breaking people, breaking them to the point of ending their own lives,” Young said.

Cattle producers’ share of the prices consumers pay for beef has recently rebounded a bit, to 39% in March, from as low as 31% in June 2020 when massive Covid-19 outbreaks slowed meatpacking plants during the early phases of the pandemic. But farmers’ share remains well below pre-pandemic levels, when it ranged between 60% annually in 1990 and 43% in 2019, according to USDA data.

Tyson Foods, Cargill, National Beef and JBS SA, whose USA Holdings CEO Tim Schellpeper also testified, together slaughtered 85% of grain-fattened cattle used for steaks, roasts and other cuts of meat for consumers in 2018, according to the U.S. Agriculture Department.

Julie Anna Potts, President and CEO of the North American Meat Institute, an industry trade group, urged Congress not to “make radical changes” to rules governing cattle or beef, warning “such changes will upend the markets, increase costs for the entire supply chain, including for consumers.”