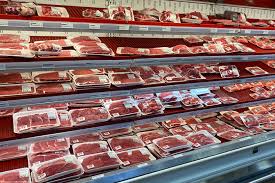 Pork production is forecast to decrease to 27.19 billion pounds in 2022, down 1.8 percent year over year.  The March Hogs and Pigs report showed that inventories of both market hogs and breeding hogs were down from last year.  Per capita pork consumption is projected to be 50.3 pounds in 2022, down from 51.0 pounds last year.  Pork exports are expected to decrease in 2022 on weaker exports to China.  This will offset some of the decrease in production thus muting the decrease in domestic pork consumption.

Broiler chicken production is forecast to increase 2.3 percent in 2022 to a record 45.44 billion pounds.  Per capita broiler consumption is projected to be 97.8 pounds this year, up from 96.4 pounds in 2021.  Highly Pathogenic Avian Influenza (HPAI) is a threat to all poultry markets but has so far mostly impacted laying hens and turkeys.  However, broiler export bans are already restricting exports and could expand further.  HPAI could result in some reduction in broiler production, but export bans could result in more broiler meat being directed to the domestic market, thereby increasing domestic consumption even more.

Beef production in 2022 is forecast to decrease by 2.2 percent to 27.39 billion pounds, down from the record level of 28.01 billion pounds last year.  Beef consumption is projected to be 57.2 pounds in 2022, down from 58.8 pounds last year.  Declining beef cattle inventories will result in reduced cattle slaughter this year and declining beef production through the year.  Beef exports are expected to decrease from the 2021 record levels.

High feed prices will impact all livestock industries and may moderate meat production going forward.  Feed costs increased significantly in 2021 and will push even higher in the coming months.  Beef will be additionally impacted by drought conditions and reduced production of pasture and hay.  Drought may impact the timing of beef production with drought liquidation potentially increasing beef production temporarily but leading to a larger decline in beef supplies later.

Retail prices are high for all meats.  Reported retail prices in February were up 14 to nearly 16 percent year over year for beef, pork and broilers.  Meat prices are not expected to continue rising but may stabilize and hold near current higher levels.