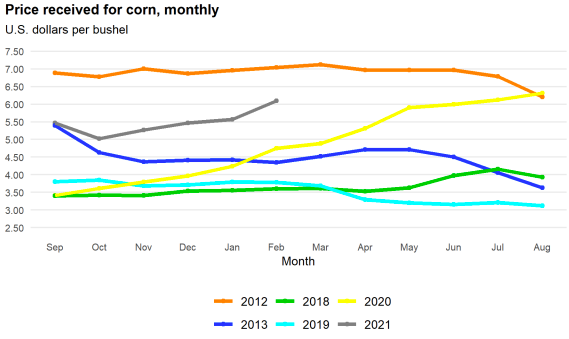 The outlook for 2021/22 U.S. corn markets in the April World Agricultural Supply and Demand Estimates (WASDE) report is for offsetting changes to domestic feed and residual use, and to food, seed, and industrial use from the March report. The result is projected ending stocks unchanged.

The Russian military invasion into Ukraine continues to be the chief factor affecting global grain trade. Recent information and developments have been incorporated into an initial assessment of the consequences of the crisis and were presented in the March report. For a second month in a row, Ukrainian corn exports are sharply reduced. Since the beginning of the invasion, USDA projections for Ukrainian corn exports have dropped by about 30 percent. A drop in corn exports is also projected from Serbia. The reductions are expected to be partly offset by higher exports of the other major corn suppliers. The main foreign market for Ukrainian corn in recent years has been China, and it is unlikely that other corn suppliers can fully replace the drop in Ukraine’s exports to the country. Chinese corn imports are thereby projected down.