This past week brought winter-like weather up north and summer weather down south. April snow brought drought improvements to the Northwest, northern California, Upper Midwest, and Northeast. However, the Southwest and Southern Plains experienced dry, windy, dusty conditions and wildfires. As of April 19, 2022, 46.35% of the U.S. and 55.38% of the lower 48 states are in drought. 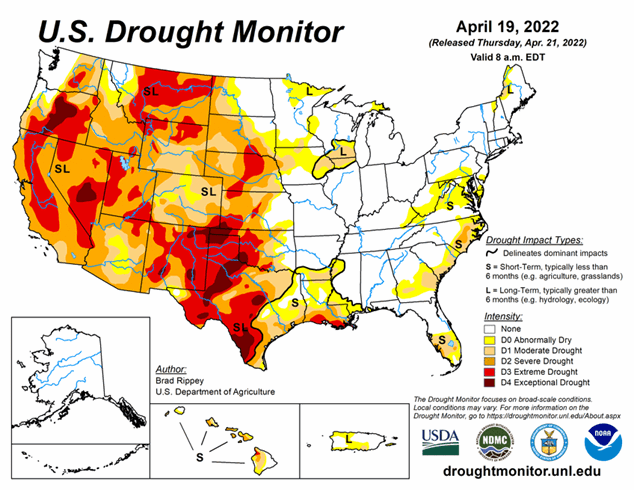 The drought-monitoring period, which began on the morning of April 12 and ended early April 19, featured a powerful spring storm delivering significant, late-season snow from the Cascades and Sierra Nevada to the northern Plains. High winds and blizzard conditions accompanied the snow, especially across the northern Plains. Farther south, drought conditions worsened across portions of the central and southern Plains and the Southwest, amid windy, dry conditions. At times, winds raised dust and contributed to the rapid spread of several wildfires, including the 6,159-acre McBride Fire, which destroyed well over 300 structures after being ignited on April 12 in Ruidoso, New Mexico. Meanwhile, heavy showers and locally severe thunderstorms swept across the Mississippi Delta and environs, producing widespread rainfall totals of 2 to 4 inches or more and causing localized wind and hail damage. Significant rain fell in other areas, including parts of the Midwest and Northeast. During the last 24 hours of the drought-monitoring period, rain swept into the Atlantic Coast States, with some wet snow observed across the interior Northeast. Warm weather prevailed for much of the period in the South and East, while a harsh cold snap engulfed the northern Plains and Northwest. In fact, an extended spell of chilly weather broadly covered the western U.S., as well as the upper Midwest.

A parade of Pacific storms will maintain unsettled weather across much of the country during the next several days. One of the most consequential storms will traverse the western U.S. on April 21-22 before intensifying over the northern and central Plains. The storm system will result in similar impacts to those observed last week, including wind-driven snow across northern sections of the Rockies and Plains (mostly on April 22-23); high winds, possible blowing dust, and an elevated wildfire threat over a multi-day period across portions of the central and southern Plains and the Southwest; and a multi-day risk of severe thunderstorms, especially during the weekend from the Plains into parts of the mid-South and Midwest. In contrast, negligible precipitation will fall during the next 5 days along the Gulf Coast, in the Atlantic Coast States, and across the Southwest.

The NWS 6- to 10-day outlook for April 26 – 30 calls for near- or below-normal temperatures across much of the country, with the greatest likelihood of cool conditions focused on the Great Lakes States. However, warmer-than-normal weather will prevail from southern California to the central and southern Great Plains. Meanwhile, near- or below-normal precipitation should be observed nationwide, except for wetter-than-normal conditions from the northern Cascades to western North Dakota.