California and Texas are the two most populous states in the USA—and they both saw the biggest area expansions of Extreme Drought (D3) this week. Texas saw Exceptional Drought (D4) expand too, the highest level according to the U.S. Drought Monitor. As of April 12, 2022, 47.5% of the U.S. and 56.7% of the lower 48 states are in drought. 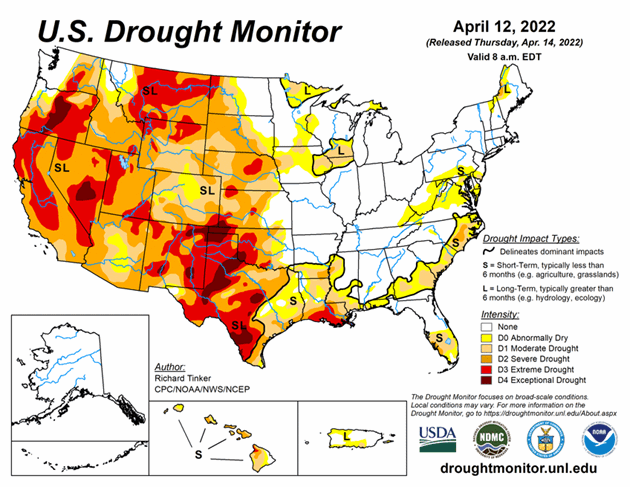 A series of storms dropped moderate to heavy precipitation on much of the eastern half of the country, with 3 to locally 6 inches of rain falling on a swath from central Alabama to central South Carolina, near the Mississippi and Ohio Rivers confluence, areas from the Delmarva Peninsula to southeastern New York state, and portions of the Cascades and coastal areas in Washington and portions of Oregon. Temperatures did not average far from normal except in the southwestern and northeastern parts of the country. The Southwest, The Great Basin, most of California, and New England experienced temperatures up to 5 deg. F in spots. In addition, episodes of low humidity and strong winds worsened dryness across much of the Plains and adjacent Rockies.

The storm system bringing blizzard conditions to the northern Plains will be moving out, followed by a late-season outbreak of Arctic air. Unseasonably low temperatures will push through much of the Nation during April 14 – 18, 2022. Daytime maximum temperatures will average at least 3 deg. F below normal everywhere outside the Atlantic Seaboard and the southern tier of the country from the Southeast to the desert Southwest. In the northern Plains and adjacent areas, daytime highs are expected to average 18 to 25 deg. F below normal. In contrast, highs should average 3 or more deg. F above normal from most of Texas through the Four Corners Region and parts of Nevada. The greatest departures from normal will be in the southern High Plains and lower Rio Grande Valley (+5 to +10 deg. F). Heavy precipitation (2 to 4 inches and locally more in higher elevations) is expected across central and southern parts of Mississippi and Alabama, southeastern North Carolina, upper New England, and the coastal and elevated parts of the Northwest from central Virginia to the Canadian Border. Moderate amounts (0.5 to 2.0 inches) should pelt the rest of the Pacific Northwest, most of the Southeast and the lower Mississippi Valley, most of the coastal Carolinas, southern New England and the adjacent Northeast, the northern Great Lakes Region, and the higher elevations of the northern Rockies. Meanwhile, light precipitation at best is expected across the southwestern quarter of the country, the central and eastern Plains, the upper Mississippi and Ohio Valleys, the Appalachians, and the middle Atlantic region.

The ensuing 5 days (April 19 – 23) should see below-normal temperatures lingering across the northern Great Plains and most locations from the Mississippi Valley to the Atlantic Coast. The northern Intermountain West, Pacific Northwest, and northern two-thirds of California are also expected to average colder than normal. Meanwhile, odds favor warmer than normal conditions across most of the Plains, Rockies, Great Basin, and Southwest. New Mexico, eastern Colorado, and adjacent areas have the best odds for above-normal temperatures. Above-normal precipitation is expected in New England, southwestern Texas and adjacent New Mexico, the upper Mississippi Valley, the northern Plains, and most places in and west of the Rockies outside the Southwest. Meanwhile, there are enhanced chances for subnormal precipitation from the central and southeastern Plains eastward through the Ohio Valley, much of the Mississippi Valley, the Appalachians, the Southeast, and the middle Atlantic region.