Beef exports slowed down in February compared to January 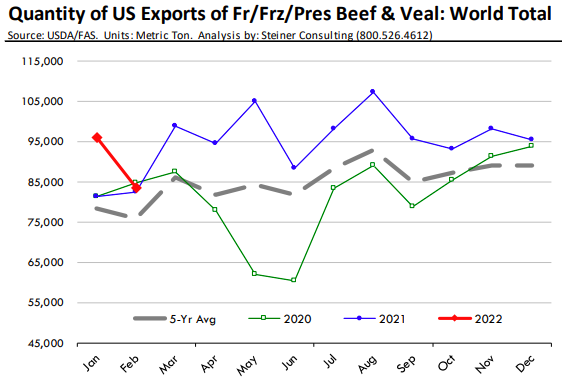 Beef exports slowed down in February compared to January levels, largely a result of the spike in prices at the start of the year. The slowdown in exports to China was a major factor but shipments to other markets were down as well. China has emerged as the third largest market for US beef and exports of fresh/frozen beef in February were 14,347 MT, down from around 16,000 MT in January but still about 80% higher than a year ago.

In February China was the third largest export market for US beef but not far from Japan and S. Korea. Based on the current pace of sales, we would not be surprised if in a given month China emerges as a top market, although probably not for the entire year. Shipments to Japan in February were 18,319 MT, down 11% from a year ago and shipments to S. Korea were 18,337 MT, down 20% from a year ago.

Exports to a number of smaller markets were higher and total exports for the month were 1.4% higher than a year ago. We expect to see exports rebound in March based on weekly shipments and our current projection is for March exports to be up 10-12% from a year ago.