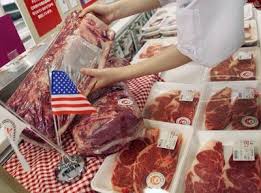 Coming off a record-breaking performance in 2021, US beef exports remained red-hot in January, according to data released by USDA and compiled by US Meat Export Federation (USMEF). Pork exports continued to trend lower in January, despite another outstanding month for exports to leading market Mexico.

Beef exports totalled 119,066 metric tons (mt), up 13% from a year ago, while value soared 57% to $1.03 billion. This was the third-highest value total on record – trailing only August and November of last year – and export value per head of fed slaughter set a new record, topping $500 for the first time.

“This is a truly remarkable run for US beef exports, and the momentum is not limited to our large Asian markets,” said USMEF President and CEO Dan Halstrom. “Regions such as Central America and the Caribbean contributed significantly to January export growth, and export value made strong gains in the Middle East.”

Beef exports to South Korea reached a record $2.38 billion in 2021, and demand didn’t miss a beat in January. Exports to Korea climbed 39% from a year ago to 29,578 mt, while export value nearly doubled to a record $316.5 million (up 99%). While US beef’s pandemic-era growth in Korea has been largely driven by soaring retail demand, the foodservice outlook is also brightening as health officials recently loosened social distancing requirements and allowed longer operating hours for restaurants. Korea’s tariff rate on US beef, which was 40% before the Korea-US Free Trade Agreement entered into force, dropped to 10.7% this year and will reach zero at the end of 2026.

Demand for US beef in China/Hong Kong remained strong in January, climbing 69% from a year ago to 19,772 mt, while export value more than doubled ($194.2 million, up 115%). USMEF projects continued growth for US beef in the region this year, though at a more moderate rate than in 2021 when export volume increased 87% year-over-year to more than 240,000 mt. Meaningful access to China – which was first achieved in early 2020 through the Phase One Economic and Trade Agreement – is also a supportive factor in the prices US beef cuts command in other Asian markets.

Other January results for US beef exports include:

Exports to Taiwan raced to a fast start in 2022, climbing 80% to 6,914 mt, while export value jumped 115% to $83 million. However, the large increase in January was due in part to delayed shipments that would normally have arrived before the end of the year.

Beef exports to the Middle East were relatively steady in volume (6,761 mt, down 1%), but increased 29% in value to $26.3 million, led by strong value growth in Egypt, the United Arab Emirates and Kuwait.

A rebound in foodservice demand helped beef exports to the Caribbean climb 28% from a year ago to 1,857 mt, while value doubled to $17 million, led by strong results in the Dominican Republic, Jamaica and the Bahamas.

Beef exports to Central America continued to expand in January, increasing 14% from a year ago to 1,803 mt, while value jumped 45% to $13.1 million.