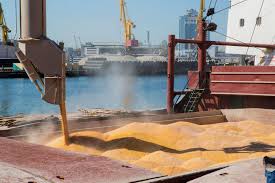 Wheat futures surged by their daily price limit again Monday, extending a relentless surge towards all-time highs and fanning fears of a global commodity shock as Russia’s invasion of Ukraine shuts off a crucial source of exports and threatens future production of the key food grain.

Russia and Ukraine combined account for 25% of global wheat exports, and Ukraine alone for 13% of corn exports, according to analysts at RBC Capital Markets. Concerns about future crop prospects are also fanning gains, analysts said.

“The risk now is that [Ukraine] planting is further compromised. We get more clarity on that topic every week, and thus far it looks problematic,” said David Whitcomb, head of research at Peak Trading Research, a Geneva-based quantitative commodity trading and research company. “How many trucks will be moving about freely in the next 60 days? How many workers available? How much fuel available? Inputs like fertilizer available?”

The surge in wheat and other grain futures comes alongside record gains last week for oil BRN00, 4.35% CL.1, 2.97% and metals as a result of Russia’s invasion of Ukraine, contributing to a record weekly surge for the S&P GSCI SPGSCI, -3.55%, a commodity index composed of 24 exchange-traded futures contracts across five physical commodities sectors, which rose around 18%.