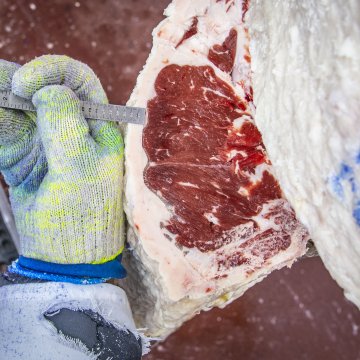 Following a safety review, U.S. food regulators said short-haired cattle produced through gene editing can be raised for meat production. Meat from the cattle could be available for purchase in as little as two years, said the Food and Drug Administration.

The so-called PRLR-SLICK cattle join a short list of gene-edited animals approved by the FDA for human consumption, including Aqua Bounty’s GMO salmon and a pig whose meat lacks the sugar that causes some people to have allergic reactions to red meat.

“We expect that our decision will encourage other developers to bring animal biotechnology products forward for the FDA’s risk determination in this rapidly developing field, paving the way for animals containing low-risk IGAs (intentional genomic alterations) to more efficiently reach the marketplace,” said Steven Solomon, director of the FDA Center for Veterinary Medicine.

The gene-edited cattle were the first to receive an FDA “low-risk determination for enforcement discretion.” The agency reviewed data about the gene-edited cattle before deciding the genetic alteration was similar to naturally occurring mutations seen in cattle in hot climates. “Further, the food from the cattle is the same as food from conventionally bred cattle that have the same slick-hair trait,” said the FDA.

Acceligen, a “precision breeding” company based in the Minneapolis suburbs, used the CRISPR gene-editing technique to produce cattle with the short-hair trait, known as a slick coat. Some scientists say cattle with an extremely short coat may be better able to tolerate hot weather.

“Our solutions allow genetics companies to continue to breed high-merit animals while also addressing health and welfare traits,” said Acceligen on its website. The company said it was interested in beef and dairy cattle, hogs and fish.

In a statement, the FDA said farmers who produce and breed PRLR-SLICK cattle using conventional breeding techniques would not have to register with the agency.

Trump administration officials proposed during their final days in office to put the USDA, rather than the FDA, in charge of regulating genetically engineered livestock. The hog industry was the leading proponent of the transfer of jurisdiction, saying the FDA moved too slowly. Since the dawn of agricultural biotechnology in the 1990s, the FDA has overseen GE animals and the USDA has regulated GE plants.