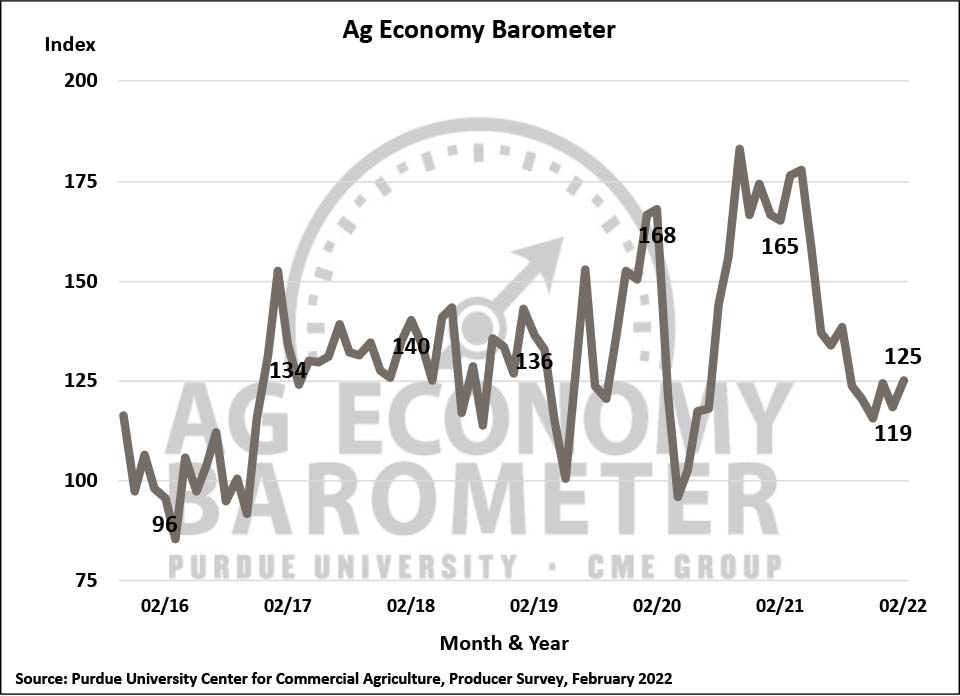 The Purdue University-CME Group Ag Economy Barometer rose 6 points in February to 125, matching the sentiment index’s reading from December. A more optimistic view of future conditions pushed the sentiment measure higher as the Index of Future Expectations rose 10 points in February to 122, the most positive reading regarding the future provided by farmers since last August. The Index of Current Conditions was virtually unchanged at 132, just one point below a month earlier. The Purdue University-CME Group Ag Economy Barometer sentiment index is calculated each month from 400 U.S. agricultural producers’ responses to a telephone survey. This month’s survey was conducted from February 14-18 2022, which was just prior to Russia’s invasion of Ukraine.

Farmer sentiment improved modestly in February as the Ag Economy Barometer rose 6 points from January to February. The shift in sentiment was primarily attributable to producers expressing a bit more optimism about the future than in January. Producers remain concerned about the spike in production costs leading them to expect weaker farm financial performance in 2022 than in 2021. Supply chain issues continue to hold back farmers’ plans for investments in farm machinery as well as buildings and grain bins. Thirty percent of corn/soybean producers said they’ve had some difficulty purchasing inputs for the 2022 crop with herbicides being the most commonly cited procurement problem followed by fertilizer and farm machinery parts. In response to high fertilizer prices, one-third of corn producers in this month survey said they plan to reduce their nitrogen application rate compared to the rate they used in 2021. Finally, the percentage of producers who say they either have no plans to increase the size of their farming operation or plan to exit or retire from farming in the upcoming five years appears to be increasing over time, rising from one-third of respondents in 2016 to just over half of the respondents to this month’s survey.