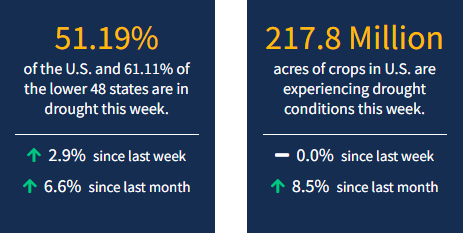 Conditions are deteriorating in the two biggest states in the Lower 48: California saw a large expansion of Extreme Drought (D3) while Texas saw Exceptional Drought (D4) develop in a number of places, according to the latest U.S. Drought Monitor. As of March 15, 2022, 51.09% of the U.S. and 60.98% of the lower 48 states are in drought. 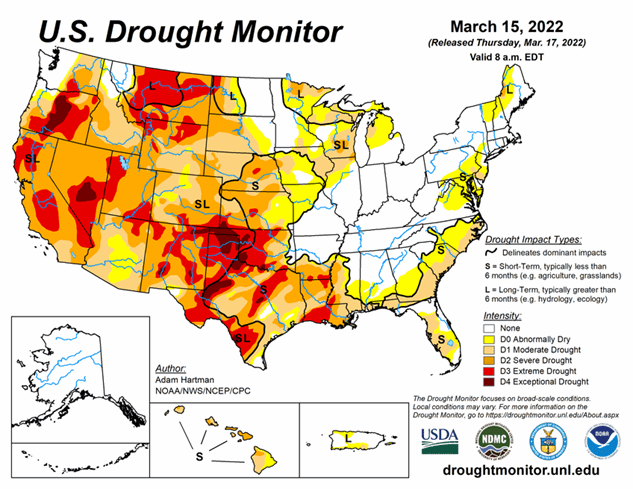 High pressure dominated across much of the central U.S. this week, bringing much below-normal temperatures (more than 10°F below-normal) to the Eastern Rockies, Great Plains, and parts of the Mississippi Valley. Much of the north-central U.S. remained below freezing last week. However, where daytime high temperatures did average above the freezing mark, below-normal precipitation and high winds resulted in some drought degradation across parts of the Great Plains. A series of low pressure systems moving across the southern and eastern U.S throughout this week brought heavy rainfall to parts of the Gulf Coast states and Eastern Seaboard, leading to drought improvements. Northern Florida received the greatest rainfall amounts, with several areas picking up anywhere from 5 to 10 inches of rain through Saturday. The strongest of these storm systems also brought snowfall to the Appalachians and interior areas of the Mid-Atlantic and Northeast Friday into Saturday. In the Pacific Northwest, a series of storms brought some drought improvements to parts of the central Cascades and interior northern Rockies. Farther south across California, drought intensified this week due to mounting deficits since the beginning of the year.

A storm system will exit the Rockies Thursday, bringing the potential for snowfall to the Eastern Rockies and Front Range. This system is forecast to intensify and move eastward across the lower 48, bringing an increased potential for precipitation of various types to many areas across the eastern U.S. before exiting the Eastern Seaboard by late Sunday into early Monday. As this system exits the eastern U.S., another low pressure system is forecast to track across the western U.S. and intensify over the Great Plains leading up to Tuesday. In the West, much of the heavier precipitation is forecast across parts of the Pacific Northwest, associated with the storm system later in the week. There are also increased chances of precipitation and high elevation snowfall across much of the West as this system tracks across the Rockies. The heaviest 7-day precipitation amounts are likely to be focused across parts of the Central and Southern Plains eastward to the Middle and Lower Mississippi Valley, with amounts accumulating from both storm systems.

The Climate Prediction Center’s 6-10 day outlook (valid March 22-26, 2022) favors above-normal temperatures across much of the western and eastern contiguous U.S. (CONUS) and the Northern Plains. In the central CONUS, near and below-normal temperatures are forecast for many locations, associated with a mean trough of low pressure. Below-normal precipitation is favored for much of the western third of the CONUS, underneath a mean ridge of high pressure. Conversely, above-normal precipitation is favored for the eastern two-thirds of the CONUS, associated with mean southerly flow from the Gulf of Mexico enhancing precipitation chances, particularly across the Southeast.