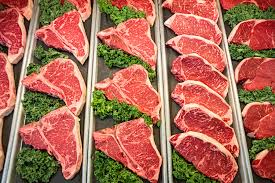 Nobody was physically injured when an August 2019 fire broke out at a Tyson Foods’-owned beef packing plant in Holcomb, Kansas, but plenty of wallets were.

The resulting four-month shutdown of the country’s second-largest beef packing plant, which was responsible for roughly 6% of the country’s total beef slaughter at the time, triggered wholesale beef prices to rise 10%, harming restaurant chains, grocery stores, and individual consumers shopping in the meat aisle.

That one fire at a single meat packing plant could have such a dramatic effect on beef prices was the result of years worth of consolidation in the meat industry. Each year since 1980, an average of almost 17,000 cattle ranchers have gone out of business, according to a 2019 report from the Open Markets Institute, an anti-monopoly think-tank. In the mid-1990s, nearly 90% of U.S. hogs were sold into competitive markets, but by 2019 the proportion was under 7%, the report says. Four mega meat packers control 85% of the beef market, four firms control 54% of the poultry market, and four firms control 70% of the hog processing market.

The Holcomb fire brought the meat market consolidation closer to the forefront of consumer awareness as prices rose, but the problem has been revealed repeatedly over the past three years. When there are so few meat processors, one-off emergencies—like ransomware attacks or pandemic outbreaks—at even a few meat processing factories can vastly reduce the amount of animals that can be turned into consumable meat across the nation. In the early days of the pandemic, for example, the number of pigs that could be processed declined by 45% as COVID-19 spread through the factories’ assembly lines. Pork breeders had to “liquidate” perfectly healthy pigs that they could no longer afford to feed and had no alternative meat processors on which to unload them. Customers couldn’t find their usual selections of protein in grocery stores, or began paying far more money for them.

Now, hundreds of miles from the cattle farms in Iowa and meat processors in Texas, government officials in Washington, D.C. are debating the future of the meat industry. As inflation on common goods soars and more and more small farmers and meat producers go under, a rare bipartisan coalition in Congress is looking to beef up anti-competition protections.

The coronavirus pandemic showed “how efficient the supply chain is [under normal circumstances], but [also] how un-resilient it is,” says a Republican Senate aide granted anonymity to speak candidly about reform efforts, which include a new piece of legislation as well as enhanced enforcement of an existing law. “On everybody’s mind is, how did we get here? And what can we do to fix it?”

For customers, the reduced competition has resulted in major price upticks. Meat sales constitute half of the total price increases customers are seeing at grocery check out lines, the White House said in September 2021. Beef prices were up 14% in nine months last year, pork spiked 12% and poultry was up 7%. Meanwhile, the firms responsible for the market concentration hurting both farmers and consumers were treated to a profit feast due to constrained supply: Data analyzed by the White House in December reveal that the gross profits of four of the largest meat processing firms—Tyson, JBS, Marfrig, and Seaboard—collectively increased by more than 120% since before the pandemic, while their collective net income swelled by 500%.

But Congress wants to make them try with two major bipartisan bills currently in the works. The Cattle Price Discovery and Transparency Act, orchestrated by Republican Sens. Chuck Grassley of Iowa and Deb Fischer of Nebraska, plus Democrats Jon Tester of Montana and Ron Wyden of Oregon, would create fairer standards in the heavily concentrated cattle marketplace. It would accomplish this by establishing regional mandatory minimum thresholds for the proportion of cattle that meat packers have to purchase from cattle farms under set guidelines, so ranchers aren’t left burdened with too much supply and nowhere to unload it. Among other measures, the bill would also require the United States Department of Agriculture (USDA) to create and maintain a publicly available library of marketing contracts that includes information about the duration and terms of contracts between producers and meat packers.

Senate Republican aides say they are working with the Chair of the Senate Committee on Agriculture, Nutrition, and Forestry, Democrat Sen. Debbie Stabenow of Michigan, on some “slight technical corrections, so that USDA is able to implement it easier.” After that, the bill would go through the markup process where it could be debated or amended before coming up for a vote. Bills such as these are often packaged in broader, omnibus pieces of legislation. One such vehicle could be the next farm bill, which the industry hopes passes before the 2018 farm bill expires in 2023.

Cora Fox, the director of government relations at the Iowa Cattlemen’s Association, says the fixes couldn’t come soon enough. Many of the farmers who belong to her trade group have just one or two buyers for their cattle, keeping prices artificially low. “We are at at the point where we have weathered too many market disruptions,” Fox says. “I know that this will affect the number of independent cattle feeders that we have long term.”

Pork and poultry producers wouldn’t benefit from this bill, however. Its not because there aren’t problems in those sectors, but because “chicken and pork” are “too far gone,” says the GOP Senate aide, citing how vertically integrated these portions of the market are, where the large companies own and control multiple stages of production, from the hatcheries to the chicken feed mills to the slaughterhouses and marketing. “They’re too far consolidated,” says the aide. “There’s not really any turning back.”

Another bill would have implications for the meat industry at large. After the Holcomb fire took a major beef plant out of operation for months and COVID-19 shuttered various meat packing plants across the country for days at a time, a Memorial Day 2021 ransomware attack brought cattle slaughtering at all U.S. plants of JBS, the world’s largest meat company by sales, to a halt for a day over one of the most popular grilling weekends of the year. Prices for bone-in pork butts jumped 25%, according to the Wall Street Journal. Hog farmers were once again stuck with hungry pigs that they were supposed to be shipped off the meat processors.

JBS, responsible for producing roughly one-fifth of the nation’s meat supply, paid $11 million in ransom to shield the company’s customers from further interruptions. But Democratic Sen. Tester and GOP Sens. Grassley and Mike Rounds, of South Dakota, argued the interlude showed how dangerous industry consolidation can be to the country’s food supply. They introduced a bill to establish a special investigator with subpoena power within the USDA to act with the Department of Justice (DOJ), Federal Trade Commission, and Department of Homeland Security to better enforce a law, the 1921 Packers and Stockyards Act, which carries penalties for companies that break anti-competition rules. “A single cyber attack that threatens the very food we eat is proof that something must be done, and fast,” Tester said in June when the legislation was announced.

Rounds, Tester, and Grassley all live in agricultural hubs, but Big Meat is also catching the eye of lawmakers outside of the flyover states. On Feb. 16, Sen. Elizabeth Warren, a Massachusetts Democrat, and Rep. Mondaire Jones, a New York Democrat, authored a letter to the DOJ asking it to “scrutinize” a proposed $4.5 billion merger between Sanderson Farms and Wayne Farms, the country’s third- and sixth-largest poultry-processing companies, by Cargill Inc. and Continental Grain Co. “This proposed mega merger raises significant antitrust concerns in an industry already marked by price fixing, labor violations, and intense consolidation,” the lawmakers wrote.

The Holcomb fire may have been extinguished back in 2019, but congressional attempts to prevent such an event from having an outsized effect on the meat industry are just heating up.