2022 trends continue. This past week was status quo out West as a dry January was counterbalanced by the wet December—but early February looks dry too. Meanwhile in the South, southeastern Texas saw heavy rain, but drought conditions worsened in other parts of Texas, Louisiana, and Arkansas. As of February 1, 2022, 46.33% of the U.S. and 55.2% of the lower 48 states are in drought. 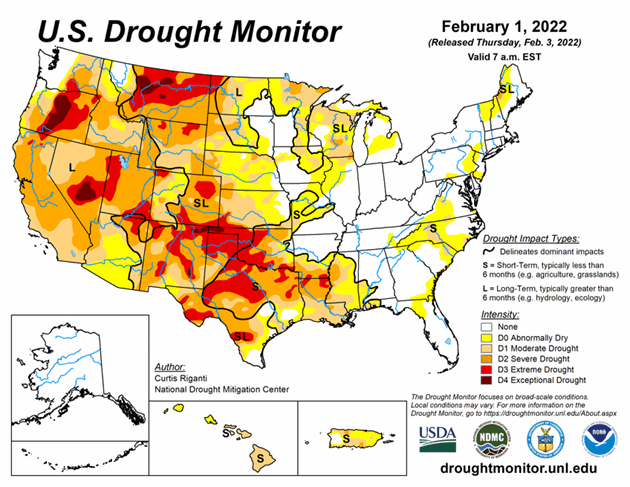 As of Wednesday, February 2, a large-scale winter storm was causing snow and ice accumulation across much of the southern Great Plains and lower Midwest. Precipitation, both wintry and plain rain, was forecast by the National Weather Service Weather Prediction Center to continue eastward and northeastward through the middle of the weekend, with some heavier precipitation amounts possible, particularly from Alabama northeast to southern Ohio. On Sunday and Monday (February 6-7), mostly dry weather was in the forecast across the contiguous U.S., though some precipitation was expected along the southeastern coast.