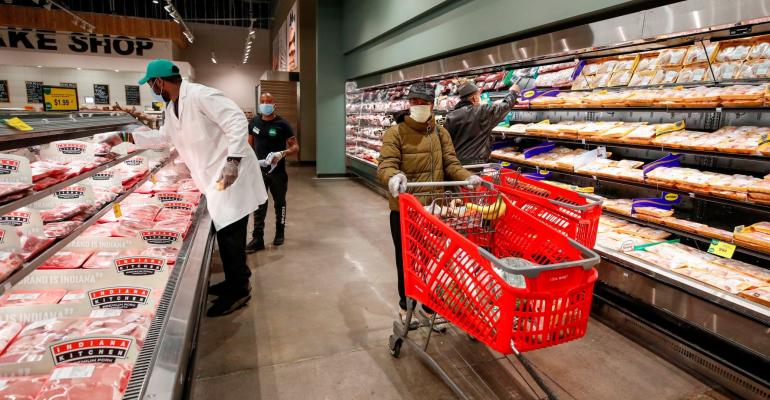 The North American Meat Institute told members of a House Judiciary Subcommittee Wednesday that consumers saw increased meat prices in 2021 due to labor shortages, greater consumer demand, supply chain problems and other factors experienced by most sectors of the economy.

"Inflation is hurting consumers by erasing the wage gains workers received due to the tight labor market and the pandemic," said Julie Anna Potts, president and CEO of the North American Meat Institute. "It is no wonder the Biden Administration and some members of Congress would rather hold press conferences and hearings instead of addressing the labor shortage and supply chain bottlenecks."

On Wednesday, the Meat Institute submitted testimony for a hearing of the House Judiciary Subcommittee on Antitrust, Commercial and Administrative Law called, "Reviving Competition, Part 5: Addressing the Effects of Economic Concentration on Americas Food Supply." The testimony included context to antitrust allegations.

"The meat packing industry has been, and continues to be, one of the most highly scrutinized industries when it comes to antitrust review," said Potts in the testimony submitted. "The USDA Agricultural Marketing Service's Packers and Stockyards Division is uniquely charged, by statute, to provide on-going oversight for fair business practices and to ensure competitive markets in the livestock, meat and poultry industries. Additionally, any potential merger or acquisition regulators believe threatens 'too much market power' is subject to review by the Justice Department or the Federal Trade Commission. The last proposed merger of two of the 'big four' fed cattle slaughterers occurred in 2008 – and it was blocked by the Department of Justice."

On Wednesday, the Meat Institute also addressed the Biden administration and producer criticism of the meat industry concentration for producers getting a smaller share of the consumer dollar than they did decades ago.

The Meat Institute said, "Unfortunately for the White House, the USDA database referenced by the White House Fact Sheet, updated with December 2021 data released by USDA, shows in 2021 beef packers' share of the consumer dollar was 22.2% – lower than the producer share. For pork, the packers' average share of the consumer dollar was 18.9% in 2021, also lower than the producers' share, which was 25.8% in 2021." 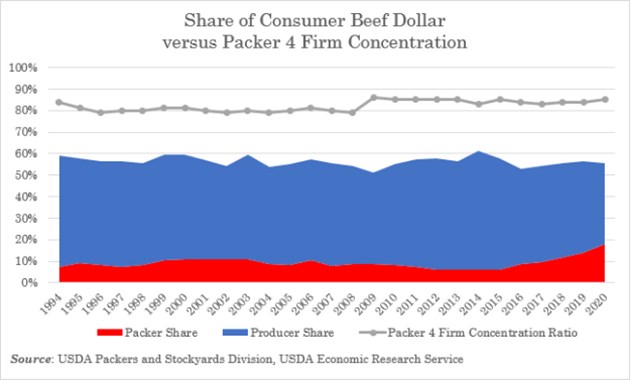 The Meat Institute also said the cost of beef for consumers has been stable since 1994 under the current structure of the fed cattle market.

"Looking for a scapegoat for economy-wide inflation, the Biden administration has alleged that meat and poultry industry concentration is to blame for rising consumer prices. The truth is not so convenient.

"Using USDA's meat industry concentration data, the chart below demonstrates that, although the four-firm concentration in fed cattle beef packing has remained relatively constant since 1994, the Consumer Price Index for beef has been variable over that same period; sometimes above and sometimes below the overall CPI." 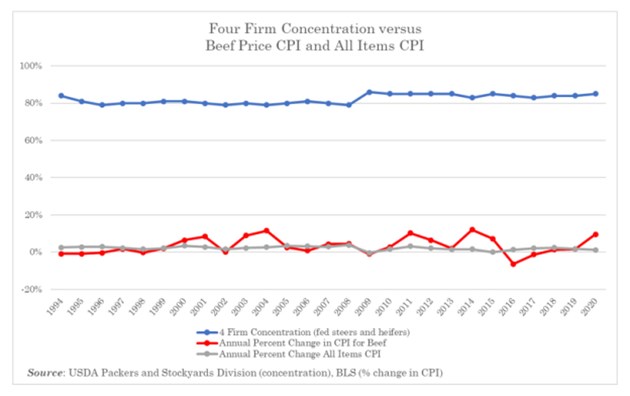