Fescue Foot on the Rise this Winter 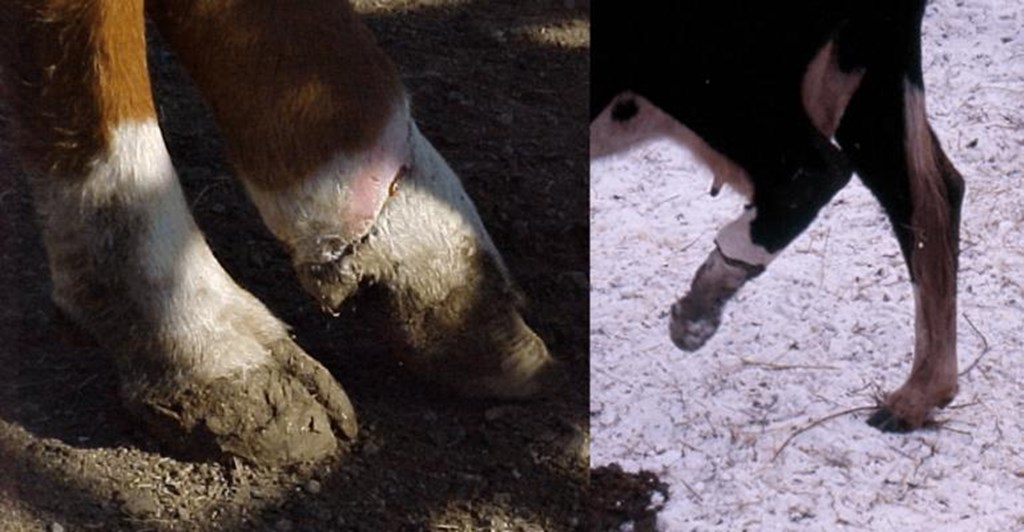 “As the cold weather moves in, cattle producers are likely to notice some cows or yearlings on fescue pastures may be slow-moving early in the day,” says Eldon Cole, University of Missouri Extension livestock specialist. This might be an early warning sign of fescue foot.

Producers may also notice slight swelling in the rear ankles and possible breaks in the skin from the top of the hoof up above the dew claw, Cole says. Early detection of limping is key. By the time hooves on hind feet show red, gangrene may have set in.

Cole suggests putting the lame animal in a chute and checking its lower leg, which might feel cooler because of the lack of blood flow in that area. If the animal’s leg feels cooler than the rest of the leg, move the affected animals from that pasture and drylot them, or at least put them on a different pasture, he adds.

On most farms, fescue remains the most-used forage. It is hardy because the toxin protects the plant from pests. However, cattle producers should consider alternative feeding options:

Wait to graze. Another preventive plan is to feed winter hay in fall cold spells. The pastures left standing in winter decrease in toxins with time. By late January, there will be less poison in the grass. Stockpiles can be grazed late in winter with few problems.

There’s no cure for fescue foot, but prevention works. Here are some suggestions:

Convert pastures. Herd owners who converted toxic fescue pastures to a novel-endophyte fescue need not worry. There are no toxins, and forage quality is higher with the new fescues. Add nitrogen. More nitrogen fertilizer on novel-endophyte grass brings more feed.

While there is no cure, the Alliance for Grassland Renewal offers training on how to renovate pastures. See grasslandrenewal.org. MU Extension agronomists and livestock specialists also can offer advice on how to prevent fescue foot.