2022 begins with drought still entrenched in most of the Lower 48. The West has improved but is still largely in drought. The Central/Southern Plains into the South are steadily worsening. As of January 4, 2021, 45.8% of the U.S. and 54.8% of the lower 48 states are in drought. 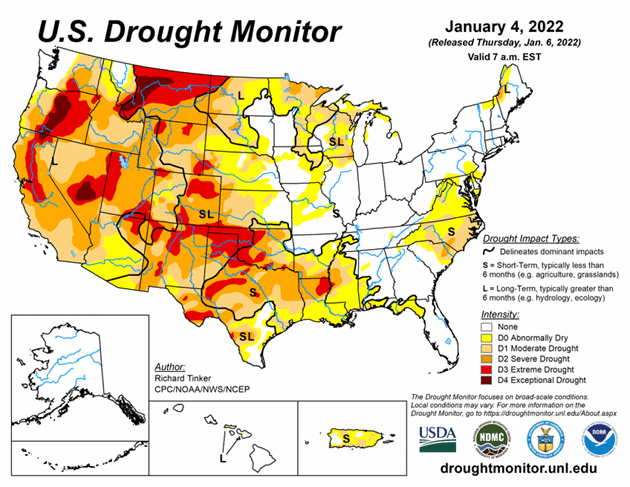 January 5-9, 2022 could benefit some of the recently-expanded areas of dryness and drought near the Gulf Coast. 0.5 to 1.0 inch is forecast along the Coast from the western Florida Panhandle through most of southeastern Louisiana, with amounts potentially topping 1.5 inches farther west into the northeastern Texas Coast.

Farther north, moderate to heavy precipitation – including some substantial snowfall – should reach from the Lower Mississippi Valley through the upper Southeast, the central and southern Appalachians, and (to a lesser extent) the Middle Atlantic States. Between 1.5 and 2.5 inches of precipitation will impact a swath extending from northeastern parts of the Lower Mississippi Valley eastward into the southern Appalachians. Moderate precipitation should extend as far north as the immediate Ohio Valley, as far east as the Middle Atlantic Coast, and as far southeast as non-coastal areas of the Carolinas and Georgia. Heavy precipitation and some heavy snows should continue to whittle away at dryness and drought in the Pacific Northwest, although it will probably bring a different set of problems. Areas west of the Washington Cascades will be most significantly impacted, with most locations recording several inches (liquid equivalent) of precipitation. Several areas extending from the Idaho Panhandle and adjacent areas southeastward into central Colorado will also see moderate precipitation, especially in the Idaho Panhandle (1.5 to locally 3.5 inches) and higher elevations in Wyoming and Colordao.

Other parts of the 48-states will see much less precipitation. Light to moderate precipitation (generally 0.5 to 1.0 inch) is expected across the Northeast, with little or none falling along the Southeast Coast and most of Florida, the Plains, and the southwestern quarter of the Nation. Temperatures will remain well below normal from the Upper Midwest through most of Montana, averaging 9 to 15 deg. F below normal. Near-normal temperatures will cover the Northeast and Middle Atlantic States while unseasonable warmth prevails along the southern tier of the country and in the Four Corners Region.

The Climate Prediction Center’s 6-10 day outlook (valid Jan 10-15, 2022) favors subnormal precipitation across most of the 48-states, with odds favoring above-normal precipitation limited to a swath from the southern Rockies to the Lower Mississippi Valley. Meanwhile, above-normal temperatures are favored near the Gulf Coast (especially Florida), the Plains, most of the Rockies, and the immediate West Coast.